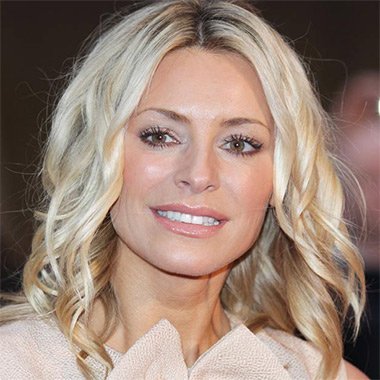 British model, television presenter, fashion and beauty blogger, Tess Daly is popular in the fashion world for being the face of lingerie company La Senza in the UK. She is also famous for being the co-presenter of the BBC show Strictly Come Dancing, which she joined in  2004.

How Much Does Tess Daly Earn From Her Profession? Salary, Net worth, Income

Tess Daly earns a hefty fortune from her multiple profession. She is the regular co-presenter of the Strictly Come Dancing on BBC One since 2004. Furthermore, Daly also co-presents  Children in Need since 2018.

Daly further adds money from her lingerie company. She earns an average salary of around $2 million per year from her career. Likewise, her annual salary as of 2019 is reportedly around $5 million.

Similarly, her spouse Vernon Kay is a television presenter and radio DJ. From his multiple profession, Vernon earns a decent sum of money and his net worth as of now is estimated to be $4 million. The duo is living a lavish life with their kids relishing the wealth they earned from their profession.

When Did Tess Daly Marry Her Husband? Relationships, Affairs, Children

Tess Daly is a married woman and is the mother of two children. On 12th September 2003, Daly got married to Vernon Kay, fellow television personality, and a former model. Their wedding took place at St Mary’s Catholic Church in Horwich, near Bolton. 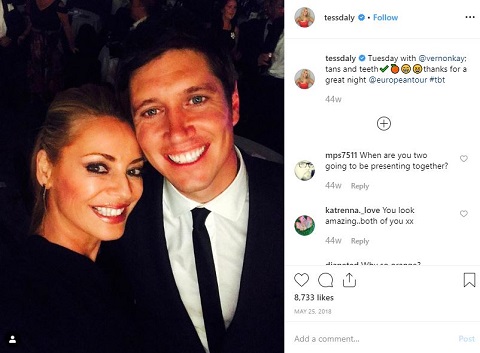 From their marital relationship, the couple is blessed with two children, daughters named Amber Isabella Kay, born on 17th October 2004 and Phoebe Elizabeth Kay born on 30th May 2009.

Tess and Kay are still together with no signs of divorce till date and lives in Fulmer, Buckinghamshire with their kids. The lovebirds are successfully maintaining their profession as well as family. 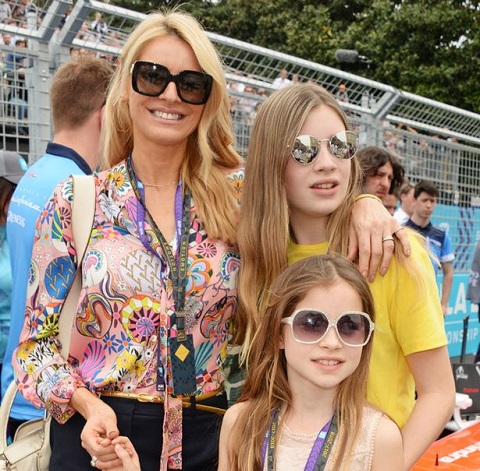 They often spend time with their family and visit different places on vacations. Daly frequently shares adorable pictures of her spouse and children on her social accounts including Instagram, Twitter, and Facebook.

What Is The Birthdate Of Tess Daly In 2019? Early Life And Education

Tess Daly was born on 27th April 1969 as Helen Elizabeth Daly in Stockport, Cheshire, England, the United Kingdom to Sylvia Daly and Vivian Daly. Her father died in 2003 due to emphysema.

Do not miss: Gail Porter Biography

Daly grew up along with her younger sister named Karen Daly. She spent most of her childhood in Birch Vale near New Mills. She is British by nationality and of white/English ethnicity. Daly attended Hayfield Primary School and later joined at New Mills Secondary School.

Tess Daly was got her modeling job after being scouted by a modeling agent when she was just 6 weeks away from turning 18. Daly first appeared as a model in Tokyo. She then modeled around Asia and Europe and finally moved back to London after modeling in Paris for about half a decade.

Daly made her debut television appearance in 2001, as a presenter of the L.A. Pool Party. She is also the presenter of the shows like A Night of Heroes: The Sun Military Awards, This Time, Tomorrow and Happy Birthday Brucie!

Tess also runs a fashion and beauty blog named test daily stylist, where she writes many tips and tricks on how to look beautiful. In early 2016, she launched a new style for disabilities on a wheelchair, which she posted on her verified Instagram account.

For her work, she received many positive reviews from audience and critics. In 2013, Tess modeled for L’Oréal and became the face of it.

Tess Daly currently co-presents a British television dance contest Strictly Come Dancing on BBC One. She is a regular member of the show since 2004. Furthermore, Daly also co-presents Children in Need on BBC One. In 2019, Tess appeared on the show Almost Never on CBBC.