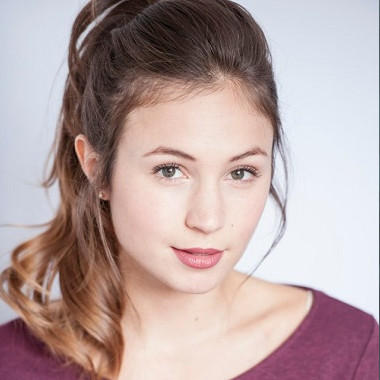 Dominique Provost-Chalkley is an English actress, well known for starring as Waverly Earp in the Sci-fi horror series “Wynonna Earp”. Dominique, who has been active in the film industry since 2009 also played Zrinka in the Marvel blockbuster film “Avengers: Age of Ultron”.

Dominique Provost-Chalkley was born on  March 24,  1990,  in Bristol, South West England to her half French-Canadian parents.  She grew up with her siblings in Bristol area. At the age of four,  she began dancing. In seeing her passion for the performing arts, Dominique trained in acting, singing and all genres of dance.  At the age of 16, Dominique studied for three years at Laine Theatre Arts. Previous to graduating she acquired a part in the West End’s hit musical Dirty Dancing where she performed the Baby Houseman at 19 years old.

During her training, she also had the wonderful opportunity of working on ITV’s series “Britannia High” in 2008.  Whilst leading in Dirty Dancing Dominique discovered her real passion for straight acting and since then has been training especially hard – from technique to screen. She has also been back and forth from LA making incredible contacts.

Dominique stars in E4’s comedy series “The Midnight Beast” as Isobel in 2012.  Paul Hyett’s ‘The Seasoning House’ (2013)  was Dominique’s first feature film which was a huge success premiering as Fright Fest’s hoping night movie and making cinema release. The trailer can be found on the reels page. Dominique then starred in the West End’s success musical Viva Forever based on the songs of the Spice Girls. Dominique made her appearance in the film  “Avengers: Age of Ultron” in 2015,  where she gained invaluable experience. Marvel Studios served as a producer.

In 2017, she also appeared in the film named, “Beautiful Devils” playing the role, Emmy. Her upcoming project  “Buckout Road” as Cleo (2017).

When she was visiting with her family in Montreal, her agent informed that Wynonna Earp’s creator and showrunner Emily Andras wanted to meet with her in Toronto. And, in a moment of serendipity, series lead Melanie Scrofano showed up at the audition to read with her. She made her notable appearance in the supernatural Western horror tel series  “Wynonna Earp”  where she played Wynonna’s younger sister Waverly. The series was developed by Emily Andras. The series is based on the comic book series by Beau Smith. which airs Mondays on CHCH in Canada and Fridays on Syfy in the U.S.

Dominique Provost-Chalkley was in a relationship with  Max Milner in 2012 but after dating a few months the two ended their relationship.  Currently, she is dating Lego Champ since 2013. She holds a British nationality and belongs to half French-Canadian ethnicity.

Dominique has a seductive body measurement with 33-25-34 inches and a height of 5 feet 4 inches. Dominique earns a handsome salary from her acting career which adds up her current net worth of  $500 thousand.