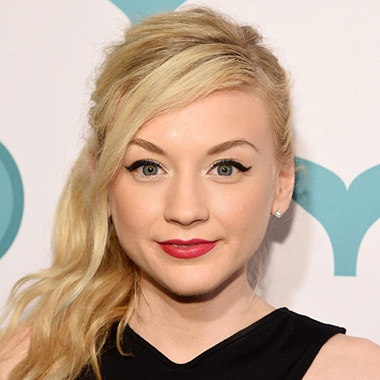 Emily Kinney is an American singer, songwriter as well as model and actress. She is best known for portraying Beth Greene on AMC’s TV series ‘The Walking Dead’. She is also popular for appearing in various movies and TV shows, including Showtimes’ Master of Sex, CW’s The Flash and on action drama series ‘Arrow’.

Emily Rebecca Kinney was born on 15 August 1985 in Wayne, Nebraska, U.S. She spent most of her childhood moving around with her parents Vaughn and Jean Kinney; to differents parts of Nebraska as well as Nevada and Oregon.
Emily Kinney attended her semester at New York University and later joined Nebraska Wesleyan University to study acting. She graduated from here in 2006 with a B.A. degree in theater.  Shortly after graduation, Kinney moved to New York City in pursuit of an acting career. But, she did not land a career in acting at once, instead, she worked in coffee shops to earn a living.

Emily Kinney landed her first professional acting role as Anna in the rock musical play ‘Spring Awakening’, at the age of 21. Prior to this, she had appeared in 20 plays during her college years. In 2007, a year after she played in ‘Spring Awakening’, Kinney co-starred in the play ‘August: Osage Country’ as Jean Fordham. Since then, she started acted in a variety of recurring guest and cameo roles in various Tv shows and movies. She was cast in ‘The Big C’ as Emily on Showtimes and guest starred as Jeannie Richmond on the NBC’s ‘Law & Order: Criminal Intent’.  Kinney made her film debut as Aunt Gina in ‘Aunt Tigress’.

Emily Kinney big break came in 2011 when she appeared as the recurring character as Beth Greene in an AMC’s horror Tv series ‘The Walking Dead’. In addition, she collaborated with Lauren Cohan on ‘The Parting Glass’ and contributed to ‘The Walking Dead: AMC Original Soundtrack, Vol 1’. Kinney left the show in 2014 but made a final guest appearance in 2015 on its fifth season.

Emily returned to Law & Order and was seen in ‘Law and Order: Special Victims’. In 2003, she released her second extended play recording ‘Expired Love’ and later added two additional tracks, which was re-released in 2014. She can also play musical instruments like guitar and piano.  In an interview, she talked about the story of the album ‘Expired Love’ and stated that it was about her story. She also said that her songs are similar to Tom Waits and write songs based on one word or feelings that keep popping up her mind.

On 9 December 2014, Kinney  released her album Rockstar. Kinney new studio album ‘This is War’, will be released in 2015. The same year, Kinney  made her musical tour.  It was announced that she will be appearing as a guest star in the sixteenth episode of ABC’s show titled “Memories of Murder” and in the eighteenth episode of The CW’s The Flash titled “All-Stars Team Up”.

Emily Kinney is not yet married and is reportedly seen dating actor, Norman Reedus since 2013. But according to E! Online, Reedus denied that he was dating his TWD co-star Emily and he was not her boyfriend. However, they were spotted several times in public places and in celebrity events. Kinney also released her own EP, Blue Toothbrush, in 2011, and regularly blogged about her life in New York for Unscripted Magazine.

Kinney has a net worth of $1.5 million dollars which mainly came from her appearance in different tv shows as well as movies and from her singing projects.