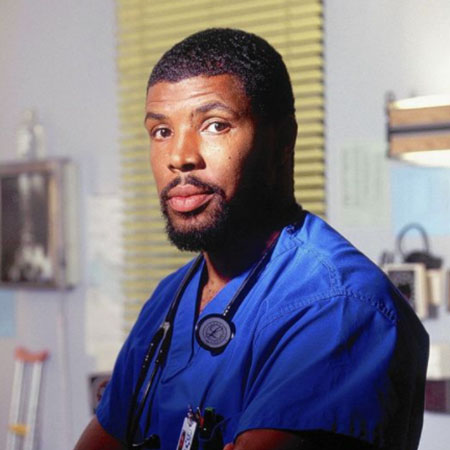 Eriq La Salle, born name Erik Ki La Salle, is an Award-winning American actor, director, producer and writer who is best known for his role of Darryl in the comedy film Coming to America. He also gained name and fame after his appearance as Dr. Peter Benton in the NBC drama series ER.

Eriq La Salle was born on July 23, 1962, in Hartford, Connecticut, United States as one of the four children to mother Ada Haynes. He completed his high school education at Weaver High School. Similarly, Eriq was also a member of Julliard School’s Drama Division-Group 13 from 1980 to 1984. Having an interest in drama since his early days, he attended New York University’s Tisch School of  Arts and graduated with Bachelors of Fine Arts Degree in 1984.

Upon graduation, he pursued his career as a full-time actor. He starred in Joseph Papp’s Shakespeare in the Park production of Henry V. Similarly, he started to work on Broadway and off-Broadway.

On tv drama One Life to Live, he portrayed the role of reporter Mike Rivers. Later, he came into the limelight after he made an appearance in NBC medical drama series ER. He portrayed the character till the eighth season of the series before he took a break from the series. In 2009, he returned to the series as a director, and he told the audience about the death of the series creator Michael Crichton.

As a Director, Producer, and Author

Besides his acting career, La Salle has also contributed to some independent films as a director and a producer. He made his debut as a director in 1996 from the HBO TV Movie Rebound: The Legend of Earl Jones. His other directorial production works include Crazy As Hell (film), Memphis (an episode of The Twilight Zone), Law & Order: Special Victims Unit, CSI: NY, Ringer, A Gifted Man and Playing Father.

La Salle has also made his identity as an author; he authored his first novel Laws of Depravity in 2012. Similarly, he has authored other two novels, “Laws of Innocence” and “Laws of Wrath”.

Having been active in the industry for more than three decades, he has received numerous nominations including Golden Globes, USA, Primetime Emmy Awards and much more. Throughout his acting career, he has made mouth-watering net worth of $40million.

Eriq LaSalle went through a tough time during 2000 when he was ditched by his girlfriend, Angela Johnson. He confronted the legal complexity when his girlfriend demanded the half worth of his house that he had bought with his money in her name.