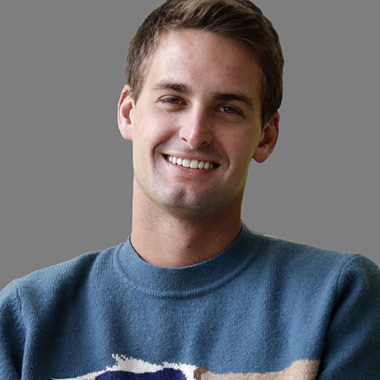 Evan Thomas Spiegel or simply Evan Spiegel, is an American entrepreneur, who was born on July 4, 1990, in Los Angeles, California, United States. Evan Spiegel is the co-founder and CEO of Snapchat, mobile application software.

Evan Spiegel’s parents Melissa Ann Thomas and John W. Spiegel both are by profession lawyers. Spiegel grew up in Pacific Palisades, California and was raised attending an Episcopalian church. He received his education from Crossroads School for Arts and Sciences in Santa Monica. Later he got admitted to Stanford University for his further study. While he was in high school, he has taken design classes at the Otis College of Art and Design and at the Art Center College of Design in Pasadena before entering Stanford University.

“There are very few people in the world who get to build a business… I think trading that for some short-term gain isn’t very interesting.”-Evan Spiegel

At Red Bull, he has done his unpaid internship and done paid internship for a biomedical company, while he was a student. In Cape Town, South Africa, he has served as a career instructor and at Intuit on the TxtWeb project. While studying at Stanford University, he proposed Snapchat as a class project for project design subject. In 2012, shortly after obtaining his degree he left Stanford University to completely focus on Snapchat. Evan Spiegel along with his two other friends Bobby Murphy and Reggie Brown co-founded the mobile application Snapchat. He is also the CEO of Snapchat. He and Bobby Murphy have experience in developing the applications and previously they have developed FutureFreshman.com, an online guide to the college applications process. They have only stated that they are responsible for the creation of that software but their other friend Reggie Brown claimed that he was also partly responsible for the creation of that idea. Google and Tencent are other companies that he admires and gives emphasizes.

Since January 2012, his product Snapchat became one of the recognized apps in the iTunes App. E-commerce giant Alibaba has recently announced that it will be investing $200 million on Snapchat. Similarly, it is also in the process of raising another round of funding that would place their valuation at $19 billion dollars.

Evan Spiegel is running at age 24 and is an active member of social media. Evan Spiegel has been romantically linked with pop superstar Taylor Swift. They have met each other in December 3013 and dated secretly for several months. He is been using twitter and has opened his twitter account by the name @evanspiegel. He has been followed by more than 28.9K followers this proves that he and his works are loved by many people. He has tweeted more than 900 times.

According to the latest information provided by Forbes, his net worth is about $2.1 billion dollars and is the youngest billionaire in the world. His is in 1250 in the world billionaires list and in the United States, he is in 418 positions. In 2014, Evan Spiegel has brought his own house in Brentwood for $3.3 million.