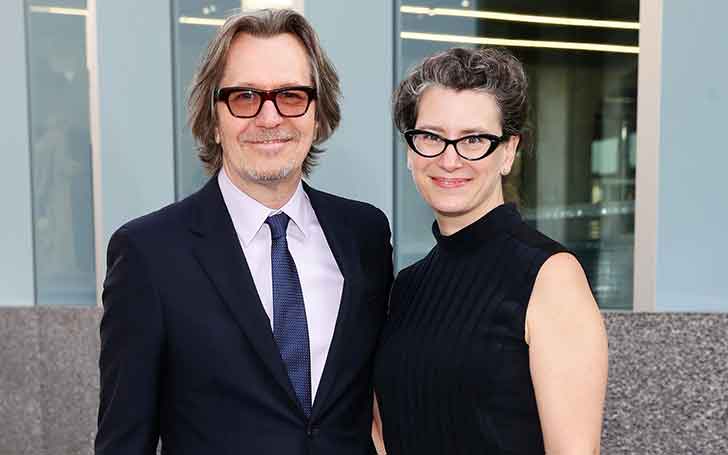 The Met Gala, last night was a star-studded evening with celebrities dressed to the nines. Among them, Gary Oldman made an impression by hitting the red carpet with his wife Gisele Schmidt. This is the actor’s fifth marriage. So, far there does not seem to be any trouble in the paradise.

Oldman seems to have finally found a partner for the lifetime. After four failed marriages, the Darkest Hour actor is living a happy life with Schmidt. To know about their Met Gala appearance, relationship, married life, affairs and more keep scrolling.

The Bram Stoker’s Dracula actor made an appearance with wife Gisele Schmidt at the Met Gala 2018 in the Metropolitan Museum of Art. Oldman was dressed in a black pant and gray-black with a bow tie. He looked charming alongside Schmidt who was dressed in a plain black gown with blue earrings and clutch.

The pair looked happy as they posed for pictures at the event. Oldman lovingly put his arm around Schmidt’s waist. They remained close throughout the event smiling at the camera.

Oldman tied the knot with Schmidt in August 2017 marking his fifth marriage. The wedding was a low key wedding which was attended only by his close family and friends. It was held at the home of Oldman’s manager in Beverly Hills. The Harry Potter actor purposed Schmidt while he was dressed as Winston Churchill during the break in the filming of The Darkest Hour.

Furthermore, Gisele Schmidt is a writer as well as an art curator. The two met due to their common interest of art and photography several years before his divorce with his fourth wife Alexandra Edenborough. Schmidt herself was married to her ex for twenty years with whom she shares a son named William.

Since the marriage, the pair has attended several red carpet events. Schmidt was also present to support Oldman in his Oscar win for the portrayal of Winston Churchill in The Darkest Hour. She is very supportive of Oldman’s career. The couple has also been seen cozying up in numerous occasions.

Looks like, fifth time’s the charm for the actor. Oldman mentioned that after ma he felt at home with Schmidt. She must be a special lady in his life to him feel such way.

Prior to this, Oldman has married four times. First, the actor married Lesley Manville in 1985 after dating for 1 year. They have a son named Alfie together. The marriage finally ended in 1990. Oldman then married Uma Thurman in 1990 after being in a relationship for over a year. They got divorced in 1992.

Furthermore, Oldman married Donya Fiorentino in 1997 after being her boyfriend for a month. The two share two children, Gulliver Flynn and Charlie John. The two got divorced in 2001 after four years of togetherness. The actor then tied the knot with Alexandra Edenborough in 2008 after dating for a year. They ended their relationship after 6 years in 2015.

After all the failed marriages Oldman is finally happily married to Gisele Schmidt. Hopefully, the marriage will last a lifetime.