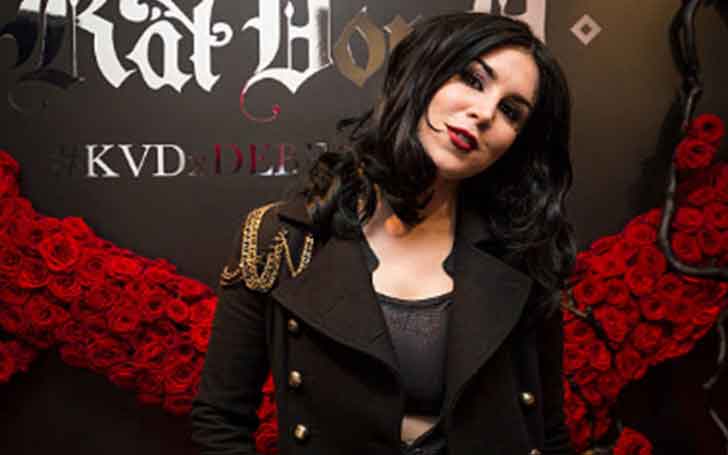 It’s a baby season. One more celebrity announced her pregnancy and this time it is none other than the tattoo artist and beauty mogul, Kat Von D.

After getting married to artist and Prayers singer Rafael Reyes aka Leafer Seyer on 28th February 2018, the couple has shared this good news with their followers via Instagram.

The LA Ink reality Tv star has been enjoying a successful career. Her Kat Von D vegan beauty line has become a staple in every beauty lover’s makeup routine. However, today in this segment, we will be exploring her personal life, baby announcement, past affairs, marriage, divorce, boyfriend and many more.

Kat Von D took to her Instagram to announce her pregnancy on 8th May 2018. She posted a picture with her husband revealing her baby bump. She captioned the picture ” It’s a boy”.

That is right Kat is pregnant with her first child, a boy. The picture shows her cradling the baby bump with one hand and embracing her spouse with the other. She is dressed in a floral ensemble and the focus is definitely on her baby bump.

Furthermore, Kat has not revealed how far she is into pregnancy. Judging from the picture she seems to be in her second trimester. This comes as a surprise to fans since she mentioned before that she did not want kids. Well, it looks like things have changed. The pair is now ready to welcome their bundle of joy.

The makeup guru tied the knot with Reyes on 21st February 2018. The wedding was a private moment between the two. The pair married alone with just the two of them. Kat took to Instagram to announce their wedding. They said that they would plan a ceremony for their family and friends.

The couple formally met in 2016. Kat featured in a video of Reyes song. She then inspired Reyes to write a song named Black Leather for her. Kat herself provided the vocals for the track. It is not clear when the two started dating. However, they made it Instagram official in January 2018.

Since then, the couple has been inseparable. They have a very romantic relationship. Both of them are quite open about their love for each other. They are supportive of each other’s career.

Prior to getting hitched with Reyes, Kat was married to a fellow tattoo artist, Oliver Peck. The two were together from 2003 till 2007. They dated for 1 year before getting married. However, the marriage ended in divorce after four years. Apart from that Kat has been linked with other guys.

Kat dated Motley Crue’s bassist Nikki Sixx from 2008 till 2010. She was then in a relationship with West Coast Choppers CEO Jesse James. The two got engaged in January 2011 and called it off in July 2011. However, they got back together and the engagement was back on before finally ending it in September 2011.

The tattoo artist then began dating  Canadian music producer Joel Zimmerman in Septemeber 2012 and broke it off in November 2012. However, Zimmerman proposed Kat over Twitter on 15th December 2012, which she accepted. The engagement was then called off in June 2013 citing Zimmerman’s infidelity as the reason.

Apart from that, the makeup mogul has been linked with Steve-O, Alex Orbison, Tom Green, Cody Carlson and Kevin Llewellyn. After all that search,  it seems that Kat has finally found the love of her life. Reyes and Kat are now awaiting the birth of their son.