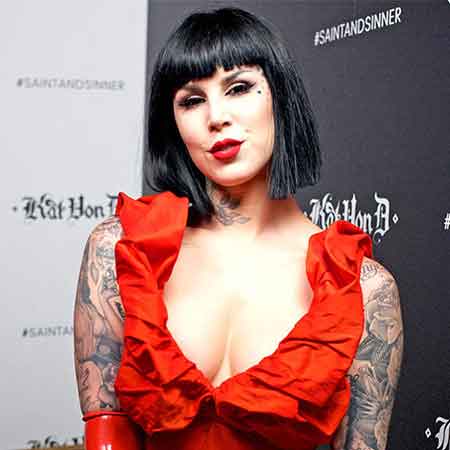 Guinness World Record holder of most tattoos given by a single person in 24 hours, Kat Von D is an American tattoo artist, model, musician, entrepreneur, as well as a television personality. She is known for her work as a tattoo artist on the TLC reality television show LA Ink.

Von D began learning piano at the age of 6 and she credits her grandmother as an inspiration for her in music and art as well as tattoo art and style. She got her first tattoo at the age of14 and left school at 16 for pursuing her career as a tattoo artist.

After Kat Von D left her school, she began her career as a  tattoo artist. She appeared in two episodes of the reality TV show called Miami Ink. The show was which taped at 305 Ink in Miami for the cable network TLC. Later, Von D began her own series at TLC named LA Ink which was recorded in her own tattoo shop, High Voltage Tattoo, in Hollywood, California.

Von D even made a Guinness World Record of most tattoos given by a single person in 24 hours. She made the record by giving a total of 400 tattoos. However, her show was canceled on 18th August 2011.

Likewise, Von D’s first book High Voltage Tattoo was released in January 2009 which compiled her artworks and tattoos. The book was ranked in the top 10 on the New York Times Best Seller’s List.

On the other hand, Von D further created and launched her makeup line for Sephora. Moreover, she is also the creator of the MusInk Tattoo Convention and Music Festival. Besides this, Von D has opened the art gallery and boutique Wonderland Gallery as well as has launched clothing line KVD Los Angeles and Kat Von D Los Angeles.

Similarly, Von D is going to start her new shoes line. Besides this, Von D has sung several songs along with her husband Rafael. Rosary Blue, Black Leather etc are some of her songs. The album Alive in New Light by IAMX was released on 2nd February 2018, which features three guest songs of Van D.

The 36 years old tattoo artist, Kat Von D is married twice in her life. Previously, Von D was married to fellow tattoo artist Oliver Peck in 2003. But the couple failed to continue their relationship and separated in 2007 after five years of their marriage.

Likewise, Von D has further dated several other stars. From 2007 to 2008, she dated Alex Orbison. After that, Von D was romantically linked with Nikki Sixx. The couple dated for two years from 2008 to 2010. At the same time, Von D was also in a relationship with Steve-O and dated from 2007 to 2016.

Currently, Von D is married to Rafael Reyes who is an author, artist, and musician from Prayers band. The duo tied the knot on 21st February 2018. Well, Von D and her husband Rafael is expecting their first child. The couple announced the news of expecting their baby via Twitter and Instagram sharing a beautiful picture on 18th May 2018.

They announced that their first child is a boy and will be named as Leafar. Von D is enjoying her married life with Rafael and yet they haven’t faced any rumors of divorce. Furthermore, there are no any rumors of their extramarital affairs.

Kat Von D earns an astonishing amount of money from her multiple careers. Von D began her career as a tattoo artist since long and she is still working in the same field. Moreover, she also earns money from her clothing lines and makeup lines.

Allocating information from several sources as of 2018 it is found out that Kat Von D current estimated net worth is around $10 million. Moreover, she also earns a good amount of money from several fashion lines and brands as an endorsement.