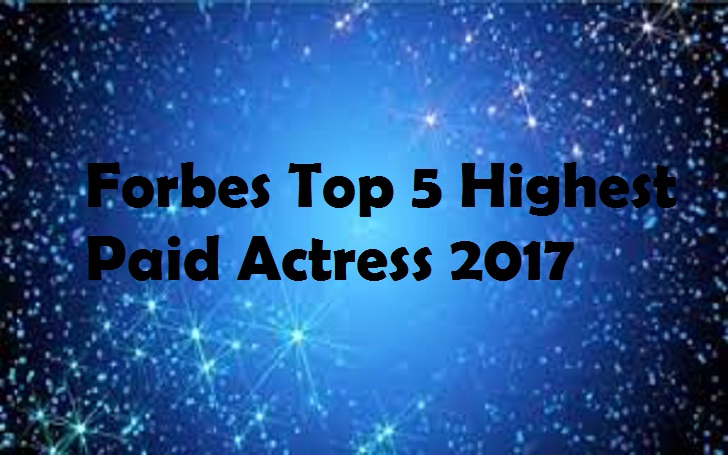 Forbes just announced the list of the highest paid actress, 2017. For the past two years, Jennifer Lawrence was the world’s highest-paid actress but her place is taken over.

So, today we have come with the list of top 5 highest paid actress allocated by Forbes. Do you wanna know who are those actresses? And who is the one to take place of Jennifer Lawrence? If yes, then here is the top list of the highest-paid actress in 2017. Stick with us.

Forbes is an American business magazine. It also reports on related subjects such as technology, communications, science, politics, and law. And, recently, Forbes announced its list of highest paid actresses. And here’s some of them. Check the list below:

Emma Stone is the highest paid actress in the world. After her break role in Superbad, she has gone from unusual comedian to dazzling A-list starlet overnight.

Emma Stone was first known as Emily Jean Stone, she was a huge fan of the Spice Girls and Emma Bunton. So she changed her name as ” Emma” in her school and she registered the Screen Actor Guild as the name “Emma”. She has said:

“I wanted to dress like the Spice Girls. I got platform Skechers, had bell-bottoms. A lot of peace signs. I cut bangs like Baby Spice because I had blond hair.”

She is the perfect combination of beauty with brain. Similarly, she is able to take place in the heart of her fans. So, she is listed in no.1. Let’s just talk about no.2.

Amy Adams is an American actress and singer. She was born 20th August 1974, and began her career at the age of 25 by performing in dinner theatre and later on she made her own feature film debut in Drop Dead Gorgeous.

Talking about her personal life, she is married to Le Gallo in 2015. She met him in an acting class and got engaged in 2008. They have a daughter together and are living a happily married life.

She was named one of 100 most influential people in 2014 by Times Magazines and is among the highest-paid actresses in the world by Forbes.

Julia Robert is one of the top box-office earners in Hollywood and is enlisted as the highest paid actress. She is best known for such films as Steel Magnolias, Pretty Woman, and Erin Brockovich.

She was born on 28th October 1967. Julia wanted to be a veterinarian but later on, she headed to New York City to pursue a career in acting. She made her first screen appearance in the film Satisfaction. Julia came to the head light after she starred an with an actor, Richard Gere in the Cinderella, Pretty Woman in 1990.

Moving towards her personal life, she had romantic relationships with many popular guys but at present, she is living a happily married life with her husband Daniel Moder. He an American cinematographer. They are blessed with three children.

Cate Blanchett is an actress and theater director. After her role as Elizabeth, she came to an international attention and also has won the BAFTA award for Best Actress.

She was born on 14 May 1969 in Melbourne suburb of Ivanhoe. During her childhood, she had a penchant for dressing in masculine clothing. She began her acting career when was she enrolled in the National Institute of Dramatic Arts (NIDA).

Blanchett’s first major stage role was opposite Geoffrey Rush in the 1992 David Mamet plays Oleanna for the Sydney Theatre Company.

She is married to her husband, Andrew Upton in 1997. He is a playwright and screenwriter. They have 4 children: 3 biological sons and 1 adopted daughter. Cate is living a happily married life with her husband and children.

Charlize Theron is an African and American actress and producer. She was born on born 7 August 1975 in Transvaal Province of South Africa.

At the age of 16, she won a 1-year modeling contract at a local competition. After several months, she made her film debut with a non-speaking role in the horror film Children of the Corn III: Urban Harvest (1995).

She dated her boyfriend, Stuart Townsend and lived together in Los Angles but they split up and are living separately at present. She adopted two children.

For the movie Monster, she won the Academy Award, Silver Bear, Golden Globe Award and Screen Actors Guilford Award as the Best Actress. She is also known as the highest paid actress by Forbes.

So they were top 5 highest paid actress. We hope that you enjoy reading this.