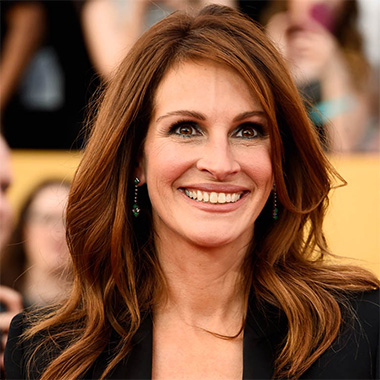 Julia Roberts is an American actress as well as a producer. She became famous after her romantic comedy movie Pretty Woman. She has won many awards and nomination for her performance.

Julia was born on October 28, 1967, in Smyrna, Georgia, U.S. Her birth name is Julia Fiona Roberts. Her parents are Betty Lou Bredemus and Walter Grady Roberts. She has German, Scottish, Welsh, English, Swedish and Irish descent. She was raised Catholic. She has an older brother named Eric Roberts and a sister named Lisa Roberts Gillan. In 1972, her parents got divorced. She studied at Fitzhugh Lee Elementary School and later graduated from Campbell High School. She attended Georgia State University.

She got a role in the film Satisfaction alongside Justine Bateman and Liam Neeson. The film was released on February 12, 1988. She had a small role in Blood Red, opposite her brother. On February 13, 1987, she appeared in television series Crime Story with Dennis Farina. In 1988, she performed in the independent film Mystic Pizza. She was featured in Steel Magnolias in 1989. For her performance, she won Golden Globe Award and nominated for Academy Award. In 1990, she starred in Pretty Woman. She was awarded the role after many other actors turned down the offer. She won Golden Globe Award and was nominated for Oscar Award. In 1990, she appeared in the thriller Flatliners and in 1991 she appeared in Sleeping with the Enemy. In 1991, she played as Tinkerbell in Hook. In the same year, she played as a nurse in Dying Young.

In 1992, she did a cameo appearance in The Player. In the same year, she co-starred in The Pelican Brief with Denzel Washington. In 1996, she co-starred in Michael Collis with Liam Neeson. She also starred in Mary Reilly in 1996 and in My Best Friend’s Wedding in 1997. She starred in the film Stepmom, Notting Hill and in Runaway Bride.

She won the Academy Award in 2001. With Billy Crystal, Catherine Zeta-Jones, and John Cusack she appeared in the romantic comedy America’s Sweethearts. She starred in road gangster comedy The Mexican with Brad Pitt. The film did the business of $66.8 million at the U.S. box office. She appeared in a comedy-crime-caper film Ocean’s Eleven in fall 2001. The film became the fifth highest grossing film of the year collecting $450 million worldwide. She was cast in drama film Mona Lisa Smile in 2003. She got the role in a romantic drama film Closer after replacing Cate Blanchett. In 2004, she appeared in the sequel Ocean’s Twelve and in Ocean’s Thirteen in 2007. In 2006, two films; The Ant Bully and Charlotte’s Web were released. She did voice job in both animated films.

She was in a romantic relationship with Dylan McDermott, Jason Patric, Matthew Perry, Liam Neeson and Kiefer Sutherland. She got married to Lyle Lovett on June 25, 1993. In March 1995, they got separated and later divorced. She dated actor Benjamin Bratt till 2001. While she was still dating Bratt she met Daniel Moder. Moder was married to Vera Steimberg at the period. On July 4, 2002, Moder and Julia got married. The couple together is blessed with three children.