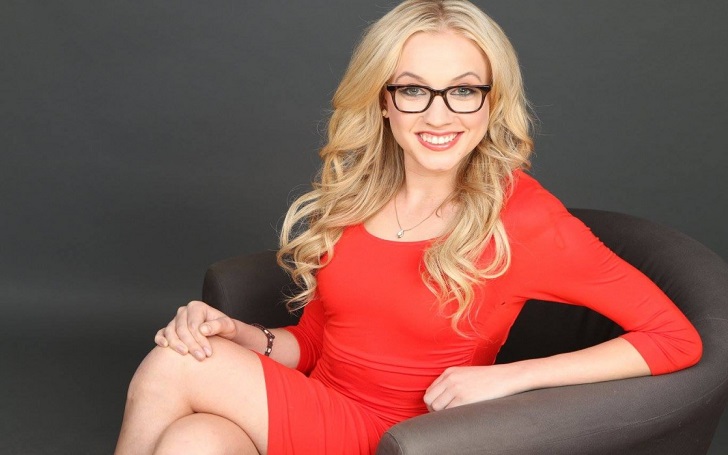 The host of the show- The Kat Timpf Show and star contributor at Fox News, Katherine Timpf is not a new name in the global news market. She co-hosted The Fox News Specialists alongside Eric Bolling and Eboni Williams in 2017.

Katherine Timpf is an American television personality, reporter, and comedian. She was born on 29th October 1988. in Detroit, Michigan, United States. She completed her education with a B.A in English.

And here are some facts about her.

1. Katherine Timpf is a Libertarian

Katherine is identified not as a traditionalist but as a libertarian. She said The Collegian:

“I’m definitely a libertarian, so I’m not as conservative on some things as Hillsdale. But I love the idea that the government does not get to decide what this private institution gets to teach.”

Campus Reform is an American conservatives news website which is focused on higher education and is operated by Leadership Institute and its reporters are the students.

Katherine’s previous job was as a reporter for Campus Reform and in 2014, she represented Campus Reform on Fox News by saying that college campuses have become too politically correct. She said:

“Students are terrified, It’s not just the typical things that you think of, ‘oh, that’s offensive.’ ‘You guys’ is even very offensive. You’re supposed to say ‘men, women, and people that don’t conform to those gender binaries.’”

3. Katherine Timpf is more than a  reporter

Most of us know that Katherine earned name and fame after being one of the fascinating contributors of Fox Channel. She is best known for her works and columns as a reputed reporter.

Katherine also runs her own show- The Kat Timpf that telecast every Monday. She also worked hard as a stand-up comedian for the comedy show called Gotham Comedy Show.

Katherine is often critical of feminism. For an example, she wrote a piece for the National Review called Ten Ways Men Oppress Women with Their Everyday Behaviour. And this is a mocking article in which Timpf ridicule the idea of manspreading.

She criticized Hillary Clinton and said that she is not a real feminist because the process that she treated the woman who accused her husband of sexual assault.

When Mr. Trump’s presidential campaign was underway, Katherine wrote an article for National Review by calling him a ‘HACK’. She wrote:

She argued that Mr. Trump is not the warrior for free speech that his followers are looking for. She wrote:

“…I can also understand why people might automatically see Donald Trump as the guy we can count on to fight against our culture becoming one that’s subject to the kind of restrictions that are in place at Tuft’s,”