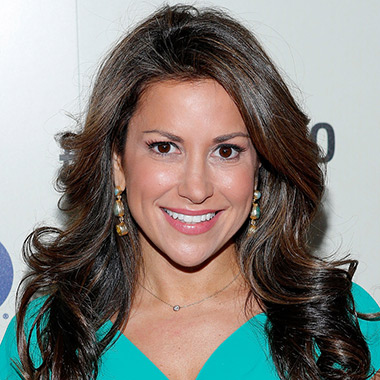 A beautiful television correspondent and anchor from America’s news network, Gigi Stone has  worked for various stations including CBS News, ABC News, and Bloomberg Television. She has established her name as an anchor, host, and producer in the world of Americans news chain.

Born on 15 October 1973, in the New York City, United States, Gigi Stone Woods spent her childhood in Manhattan and attended the Nightingale- Bamford School, as well as she was admitted to Trinity School for her passion for learning French and Spanish Language. Stone completed Master’s Degree from Columbia University’s Graduate School of Journalism, for which she won the John M: Patterson Prize for Best Television documentary. Stone has served the Peace Corps- style program in South America, as a volunteer. She had also attended the Outward Bound training school in Wilmington, North Carolina.

Stone started her media career from ABC affiliate, WWAY-TV-3, as a general assignment news reporter, where she was trained as a volunteer. She later worked at New York 1 network, as an anchor and correspondent. Stone has also worked for Business Week TV, as a business news reporter/ correspondent, where her job was to write, produce and report live daily business updates for WABC-TV and for ABC affiliates, BusinessWeek: Money Talks; which is a financial program, involving national consumer affairs. For the ABC News, Stone has worked as a correspondent and anchor. She has reported for World News Tonight, Nightline, and Good Morning America. As an anchor, she has worked on many shows such as World News Now and ABC News Now, which are the network’s 24-hour news channel. Reporting The September 11th attacks, Presidential elections ,the death of Bin Laden, the shocking breaking news events, were Stone’s biggest work  in her television career. Investigative series on pension shortfalls, health insurance, fraud and predatory lending practices are the topics which she is interested in reporting, writing and producing.

In June 2009, Stone was associated as a correspondent and host for the Bloomberg Television. She served the station on the major breaking financial news issues  and has reported and anchored live. She co-hosts the Bloomberg Television’s weekly program, profiling and interviewing the CEO of fast-growing companies called “Bloomberg Enterprise” . While working in Bloomberg TV, created, co-produced and hosted “Inspiring Woman in Business,” an interview series. Her expertise includes covering the businesses of media, entertainment, and fashion. Stone is also an on-air host and co-producer of “Hiring America”, a show dedicated to helping military veterans find jobs.

Gigi Stone established her own company called StoneWood Media, in which was regularly seen working as an on-air media trainer and TV consultant and producer. She guides the performers, authors, and executives to help them shape their media personality and improve their on-air performance skills. Gigi Stone is one of the boards of directors of “The Opportunity Network” a non-profit organization. The organization helps the low- income; high achieving students go on to a great college and careers. Stone also serve as the corporate advisory board for a media company called ‘Thuzio.’

Gigi Stone turned her love life into married life with Ian Woods in 2011. She has one child named Weston Woods with her husband. MTV’s Guy code and other various websites like complex.com, rantlifestyle.com, and wonderlist.com have listed Stone as one of “The Hottest TV Anchor”. Gigi Stone’s official twitter account is @GigiStoneTV. She has 13K followers and has tweet nearly 800. Her net worth is estimated to be $4 million USD.