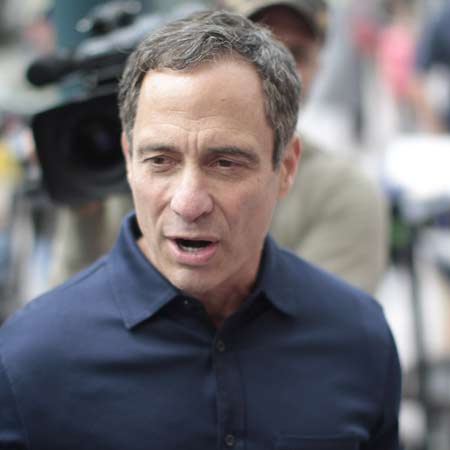 Nine times Emmy Award winner, Harvey Levin is an American tv producer, celebrity reporter, lawyer and legal analyst. Besides, he is also a founder of the celebrity news website TMZ (thirty-mile zone) and hosts the show, Objectified that airs on the Fox News Channel.

Well, Harvey Levin is openly gay and is dating his gay boyfriend, Dr. Andy Mauer, a Southern California chiropractor, since a very long period of time.

Harvey Robert Levin, better known as Harvey Levin was born on 2nd September 1950, to a Jewish family. He spent most of his childhood in the city of Los Angeles County, California. He did his schooling from Grover Cleveland High School at Reseda, Los Angeles and passed out in the year 1968.

This multi-talented personality, Harvey began his professional career as an active attorney in the state of California, since 18th December 1975 to 1st January 1996.

During the period, he had the introduction and debate surrounding California Proposition 13 in the year 1978 that made him push in front of the public in numbers of public debates. Soon, he began contributing legal advice on a radio show where he received the name, Doctor Law and wrote columns for the Los Angeles Times, where he experienced nearly for seven years.

One after another, Harvey moved his career to radio and then in TV world. His first TV job was for Los Angeles based KNBC-TV in the year 1982. There he used to cover the legal issues to the viewers. His O. J. Simpson murder case coverage rose him prominence as he was regular on-camera those days.

His creative way of presenting the information made him received his crew member’s respect and dignity. Later, he worked in the American arbitration-based reality court show, The People’s Court. And then in March 1997, he promoted to co-executive producer and on-air legal anchor.

From 2002 to 2005, Harvey created his own American News show, Celebrity Justice. Unfortunately, the show got canceled due to certain reason. Till date, they have done over 3 seasons.

The same year AOL and Telepictures Productions launched a celebrity news website, TMZ where Harvey was the founder and managing editor. In a very short period of time, the website rose to fame after the story of Mel Gibson’s DUI arrest.

Not only this, they gave one after another high-profile celebrity stories such as the abuse of Rihanna by Chris Brown, the deaths of Heath Ledger, Michael Jackson, Brittany Murphy and so on.

The Los Angeles Times listed TMZ’s coverage of the Michael Jackson death as the biggest story which has had covered till date. During the period, he also got an opportunity to met President Donald Trump.

Further, Levin has written The People’s Court: How to Tell It to the Judge. He also owns a Harvey Levin Productions, which produces TMZ and Levin’s media projects. His next creation is Famous in 12, an American reality television-social experiment series about exploiting a family for fame.

Likewise, he is currently hosting the Fox News’ OBJECTified. For the second time, Levin interviewed President Donald Trump after the success of the U.S. election. Nowadays, the show airs every Sunday at 8 PM whose every episode is pre-taped.

Well, this 67-year-old TV personality, Harvey is openly gay which he confirmed himself in an event speaker for the National Lesbian and Gay Journalists Association, in April 2010.

Though he is a gay, he is in a love relationship with his long-term partner, Dr, Andy Mauer. The duo owns multiple properties together since the late 1990s.

Harvey is one of the most influential voices in the LGBT America since 2012. The year he was ranked #15 and since then, he succeeded to list his name in the top 50 list, until 2016.

As of 2018, Harvey has an estimated net worth of $16 million, which he contributed to his profession. He also makes a lot of money from his production company. In addition, he sold his house for sale in Hollywood Hills for $3.995 million. He is an animal lover and has got one pet dog in his house, which he rescued and adopt it.