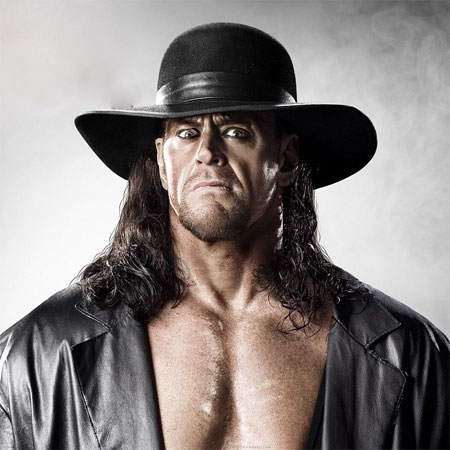 One of the greatest professional wrestlers, The Undertaker, 21 times WWE’s primer annual event WrestleMania winner is one of the well-known faces in the World Wrestling Federation (WWF, now as WWE). Besides his wrestling career, he has acted in the American science fiction movie ‘Suburban Commando’.

This legendary WWE wrestler The Undertaker is a married man; as he is currently living with his wife, Michelle McCool after two unsuccessful marital relationships with Jodi Lynn and Sara Frank. Altogether, he shares 4 children from along with his wives.

The Undertaker Early Life and Education

Mark William Calaway, better known as The Undertaker was born on 24th March 1965 to Frank Calaway and Catherine Calaway. He grew up in the city of Houston, Texas, USA along with is siblings David, Michael, Paul, and Timothy. He is the half-brother of WWE wrestler, Kane.

He did his schooling at Waltrip High School where he was a member of the football and basketball team. Later, he went to Angelina College, Lufkin, Texas on a scholarship and did his higher education in sports management from the Texas Wesleyan University but dropped out later.

Undertaker began his wrestling career during 1984; as he made his debut match for the World Class Championship Wrestling (WCCW) with the name, Texas Red and then evolved with different names in the journey of wrestling.

In 1989, he joined World Championship Wrestling (WCW), where he was given the wrestling signature, Mean Mark Callous. The following year, WCW did not establish his agreement due to which he joined World Wrestling Federation (WWF) which was later renamed as World Wrestling Entertainment(WWE), in 2002. It was great opportunity to prove himself as one of the top contenders in WWE.

After he joined WWE, he received the name, The Undertaker and made his debut with a big appearance on 22nd November 1990, at Survivor Series. In the match, he had a mystery partner of Ted DiBiase’s Million Dollar group.

During the period, he had a fight against Randy Savage and Hulk Hogan. He also defeated Hogan to win the WWF Championship after Ric Flair assists him at the Survivor Series, in 1991. He successfully became the most youngest WWF Championship. Later, the record was broke-down by Yokozuna in 1993.

In 1998, The Undertaker has had a tag team match for the WWF Tag Team Championship where he partnered the ruling WWF Championship Stone Cold Steve Austin and defeated Kane and Mankind which become one of the biggest collaboration of WWF history.

Instagram: The Undertaker and Stone Cold VS Kane and Mankind

Once, The Undertaker suffered a crotch injury and had bed rest for some period of time in order to recovery. Finally, he made his return in the 2000s with new get-up of a biker’s personality after he surrendered the undertaker themed clothing type of the past. There he wrestled against Van Dam to achieve the WWF Hardcore Championship.

This dead man got his first victory in the battle Royal Rumble match in the year 2007 after he disposed of Shawn Michaels, the 23rd contestant in the ring.

The Undertaker Record breaking in WrestleMania and Retirement

Before this, The Undertaker defeated stronger challengers like Triple H, Shawn Michael, Batista, Edge and so on in WrestleMania.

On 2nd April 2017, The Undertaker made an announcement of his retirement from the wrestling after he lost against Roman Reing for the second time in WrestleMania. In his last day, The Undertaker took off his MMA-style gloves, coat, and hat and placed them in the center of the ring. Gently, he made his exit walking over his wife, Michelle McCool and kissed her and made his signature arm-raised move and disappear in the smoke.

The Undertaker Television and Movies Career

Apart from his wrestling career, this dead man made his acting debut from Burt Kennedy’s directed movie, Suburban Commando. The movie starred Hulk Hogan, Christopher Lloyd, Shelley Duvall and Larry Miller. He has also given his voice in the animated movies like The Flintstones & WWE: Stone Age Smackdown!, Scooby-Doo! And WWE: Crush of the Speed Demon and Surf’s Up 2: WaveMania.

Not only this, he has his appearance in the TV shows like Live! With Regis and Kathie Lee, Downtown, America’s Most Wanted and so on.

Currently, The Undertaker is in a marital relationship with professional wrestler, Michelle McCool. The husband and wife tied a knot on 26th June 2010, in Houston, Texas. The Undertaker and his spouse are now proud parents of baby girl, Kaia Faith Calaway. Before this, he was married twice.

Then he married an American actress, Sara Calaway, on 21st July 2000. The wedding ceremony was held in St, Petersburg, Florida. The welcomed two daughters Chasey Calaway, in 2002 and Gracie Calaway in 2005. This time also, his marital relationship didn’t long last and divorced in 2007.

The Undertaker Net Worth and Lifestyle

As of 2018, The Undertaker has successfully collected an estimated net worth of $16 million from his profession in wrestling, acting, and video games; as he used to charge $3-$5 million salaries per year.

He has got lots of properties in his hometown, Austin Texas. He owns a mansion in his hometown which price value is around $2 million. It is 5202 sq. ft. that includes 5 bedrooms, swimming pool, and gym. Next, he has got a bungalow in Florida which selling price is $680,000.