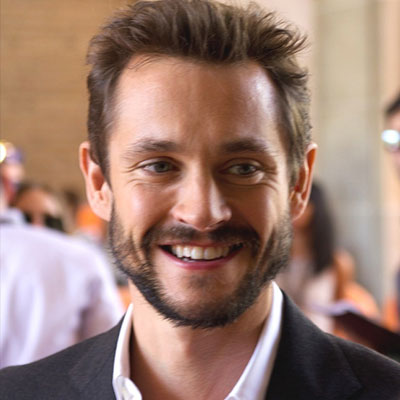 Hugh Dancy is an English actress and model better known for his portrayal role of  Will Graham in the television series, Hannibal. For his role, Dancy was nominated for the Critics’ Choice Television Award for Best Actor in a Drama Series for two times.

Dancy currently appears on the television series, The Path as Cal Roberts since 2016. Dancy is married to his beloved girlfriend, an American actress, Claire Danes. The couple has a son named Cyrus Michael Christopher Dancy. Scroll down to know in details about Dancy’s early life, education, career, awards, net worth, salary, properties, house, relationships, affairs, marriage, children, and divorce.

Hugh Dancy was born on 19th June 1975, in Stoke-on-Trent, United Kingdom and was raised in Newcastle-under-Lyme. His birth name is Hugh Michael Horace Dancy. Dancy’s mother Sarah Ann Dancy works at academic publishing and father Jonathan Dancy, a philosophy professor teaches at the University of Reading and the University of Texas at Austin.

Dancy has a younger brother, Jack Dancy who is a co-director of the travel company, Trufflepig Travel and a sister, Katharine Sarah Redman. He attended the  Edenhurst Preparatory School from the age of 5 to 10. And at the age of 10, he attended Dragon School and at 13 he joined Winchester College. Moreover, Dancy joined St Peter’s College, Oxford to study English under poet and playwright Francis Warner.

Soon after his graduation, Hugh Dancy moved to London for pursuing his career in acting and was signed by the director, Ros Hubbard and agent Dallas Smith. In 1998, Dancy made his acting debut through the television series, Trial & Retribution as Robert Bellini. The same year, he further starred in The New Adventures of Robin Hood and Dangerfield.

Likewise, Dancy made his movie debut through Black Hawk Down as Sfc. Kurt Schmid in 2001 and further starred in Young Blades. After that, Dancy starred in movies including King Arthur, Shooting Dogs, Evening etc. Similarly, he starred as Adam Raki in Adam which was premiered at the Sundance Film Festival in 2009.

Dancy gained a wide recognization after portraying the role of Earl of Essex in 2006 series Elizabeth I for which he was nominated for Primetime Emmy Award and Satellite Award. Moreover, for his role in Hannibal, Dancy was nominated for two Critics’ Choice Television Award for Best Actor in a Drama Series.

Hugh Dancy is married to his beloved girlfriend, Claire Danes. The duo met each other on the set of Evening in Newport, Rhode Island and soon started dating. After dating for a couple of months, in February 2009, the couple announced their engagement.

Well, after a few months of engagement, the couple shared their vows in the same year in France in a secret ceremony. In 2012, they welcomed their son, Cyrus Michael Christopher Dancy. Moreover, in April 2018, the duo mentioned that they are expecting their second child.

The couple is living happily and yet there are no any rumors of divorce and extramarital affairs. Besides this, Dancy was romantically linked with an American actress Anne Hathway for two years from 2002-2004. Moreover, he further dated a British artist Annie Morris from 1997 but separated after a few years.

Dancy currently resides in the West Village neighborhood of New York City along with his family. Dancy and his wife Clarie bought a four-story house in West Village in 2015 for $6.876 million featuring 5 bedrooms and 4 bathrooms.

Moreover, the couple sold their Wooster Street apartment in SoHo for $5.85 million in 2012. The house featured three bedrooms and three bathrooms situated in 3,861-square-foot space.