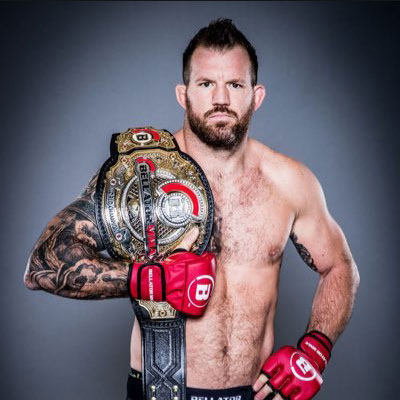 The third-ranking MMA fighter, Ryan Bader, born as Ryan DuWayne Bader is known in the MMA as Darth or Master. This season we can see Ryan fighting for the Bellator.

The two-time state champion and the reigning champion of MMA is married to wife, Daisy Bader and is the parents of three children. He has been married since 2010. He has his own line of energy drink named, Jubi.

Ryan was born in Reno, Nevada, the United States on 7th June 1983. Ryan has had a very successful career since his high school days. He was enrolled at Robert McQueen High School, Nevada, US. During his time in the high school, Ryan was a two-time state champion and he also was the fourth-ranking wrestler in the country.

For his higher education, Ryan was accepted at the Arizona State University. Bader’s university days were very prolific as well. He was able to secure the title of three-time Pac-10 champion in years 2003, 2004, and 2006.

Bader also was the winner of All-American twice, first during his sophomore year and the later one when he was a senior. After his graduation in 2007, Ryan began to train at the Arizona Combat Sports.

After his undergraduate, Rayn Bader was signed by The Ultimate Fighter. There he began as one of the contestants on season 8. At the finale of the show, Ryan faced Vinicius Magalhães and was successful in defeating his opponent.

After his debut in The Ultimate Fighter, Bader was signed by the Ultimate Fighting Championship. In his first match for UFC, he played against Carmelo Marrero and won. Unfortunately, Ryan tore his ligament and was put on a bed rest.

After he was well, Ryan returned in the box with all successive victories for Ultimate Fighting Championship.

Ryan’s first loss was on 5th February 2011. He lost against Jon Jones making it his first MMA loss. Ryan again lost his another match. Ryan received his victory in his fourth match where he faced former Light Heavyweight champion, Quinton Jackson.

Bader returned to his form and won almost all of his matches except a few. One of Ryan’s legendary match s considered where he was faced against Anthony Perosh. Bader was splendid in the match and won by unanimous decision.

Bader’s excellent skill was again seen at a match against Rafael Cavalcante on 1st June 2014. After that, he won all of his bouts.

On 21st March 2017, Bader announced that he had signed with Bellator MMA for Bellator MMA Light Heavyweight Champion. The contract was a six-bout deal. Bader is expected to be matched against Muhammed Lawal in May.

Ryan is married to his longtime girlfriend and wife, Daisy Bader. Ryan and Daisy were tied in nuptials in 2010.

The couple has two sons and a daughter. They are living a happy married life without any divorce rumors and extramarital affairs.

Along with his very successful and enumerative career, Ryan has his own line of business. Ryan has a company named Jubi Nootropic. Jubi is an energy drink which helps to reduce stress and enhance mood.

Ryan is one of the topmost paid fighters in the MMA, he gets the salary of $15,000 per fight. Allocating information from several sources as of 2018 it is found out that his current net worth is estimated to be around $5 million USD.