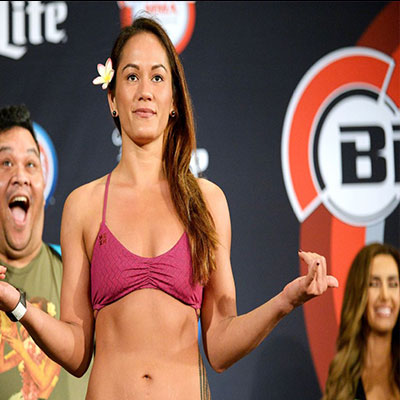 Known in the world of Martial arts by the name of The Eliminator, Ilima-Lei Macfarlane is an American martial arts fighter. She can be seen playing for the Bellator MMA in the Flyweight champion.

Macfarlane has maintained a spectacular record by remaining undefeated in any of her fights in all of her career. She has bouted in seven matches and won all the seven. She hasn’t shared any information regarding her dating, past affairs, and boyfriend.

Born on 2nd April 1990, Ilima was born in Honolulu, Hawaii, United States. She was magnetic towards martial arts since her early days. She took up lessons with her coach and began training in different styles of fighting like 10th Planet Jiu-Jitsu, BJJ, Boxing, and Wrestling.

From the Keiki Hula days all the way to the World Title, they’ve been by my side through it all. It doesn’t matter what I do, who I date, or what stage of growth my eyebrows are going through…they’re my ride or dies to the end. #tbt #Mom&Dad #leisfodays

Ilima is of Native Hawaiian ethnicity. She was enrolled at San Diego State University and got her Master’s Degree in Liberal Arts and Sciences.

Macfarlane started her early career by debuting in MMA amateur in March 2014 where she fought five matches and was successful in winning all of her bouts.

After her amateur matches, Macfarlane landed on a big controversy. A clip of Iliam went viral. The match was against Katie Castro. After the footage went viral, the California State Athletic Commission (CSAC) initiated an investigation into the origin of the footage since the bout was unsanctioned.

Even though she landed in a bit of trouble, Macfarlane’s skills and techniques were highly praised by everyone. It had taken her 10 seconds to defeat her opponent.

Macfarlane made her debut in professional MMA in August 2015 at Bellator 141. She won the bout against her opponent Maria Rios.

In 2016, she was on her best form, she remained victor in all of her three matches for the promotion. For her first match, she fought Amber Tackett and then she faces Rebecca Ruth and finally Emily Ducote.

People ask me if anything has changed since becoming champion. Honestly? My inner circle has grown smaller. And I try to do all of my shopping online. Not because people recognize me outside, just because I’m lazy AF right now and don’t want to leave my house. #truestory #fightlife #champbod #redpanda #wildwahinewednesday ??: @lucasnoonan

She was put up against Jessica Middleton at Bellator 178, MacFarlane won the match and again a rematch was organized for the inaugural of Bellator Women’s Flyweight Championship, which again Ilima won.

Ilima’s team is known as Team Hurricane Awesome. She plays in the Flyweight division and is fighting out of San Diego, California, United States. She has mastered the art of different fighting styles like 10th Planet Jiu-jitsu, BJJ, Boxing, and Wrestling.

Not much information is ousted regarding Ilima’s personal life. But she is known to be fierce in activism in Hawaii. She keeps her Hawaiian heritage close to her heart. MacFarlane is known to perform Halau Hula Olana, a native dance form of Hawaii.

She is currently in no relationship and no information regarding her husband or boyfriend is reported yet.

Ilima’s career earning is $10,000 USD per match. But we can speculate that the current unbeaten queen of the MMA has an appropriate salary as to her standing. Allocating information from several sources it is found out that her current net worth as per 2018 is around $2 million.

Just as a drop of water has a ripple effect on a river, so does every contribution to this cause. Whether it be a match, a donation of $1, or even a re-share, my heart is full with the positive messages and support since we announced the scholarship to help young native girls. Our job is far from over, but the posi vibes are strong with this one. Don’t forget to visit the link in my bio to learn more about this scholarship and the work that I do with @intertribalyouth. #fightingchance #alohaainawarriors #nativelikewater #ilimanatorscholarship #indigenize

She is known to be a fierce protector of the educational system of the Hawaii state and runs several social organizations and charity for the cause. She is also known to help the indigenous Hawaiian population and works taxingly to protect them and their culture.