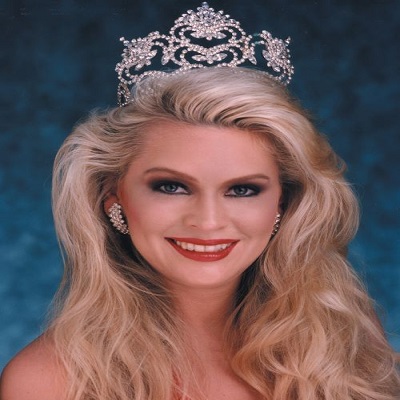 Jackie Siegel is a former model, actress, beauty pageant, director and computer engineer. She is well known as a part of the award-winning 2012 documentary film The Queen of Versailles. Moreover, she won the title of “Mrs. Florida” in 1993.

Siegel is a happily married woman to David Siegel. The duo tied the knot in 2000 and has eight children together. The couple together owns Orlando Predators, a professional arena football.

Jacqueline Mallery was born on 19th January 1966, in Binghamton, New York, United States. Growing up in Binghamton, NY, she studied at “Rochester Institute of Technology. She got a bachelor´s degree in computer technology and engineering from there in 1989.

After her graduation, she worked for IBM out of college. After realizing she desired more than just to sit in a cubicle all day, she packed her bags and went to NYC and started modeling.

Eventually, she moved to Florida where she started competing in beauty pageants. In 1993, she won Mrs. Florida America and currently, she is the director of the pageant.

Moreover, she released her documentary “The Queen of Versailles” which was directed by Lauren Greenfield in 2012. The film portrays Siegel and her husband David Siegel and their family in their private residence Versailles. The documentary was awarded at the Sundance Film Festival.

Furthermore, she was also featured in 2015‘s episode of “Celebrity Wife Swap,” a reality show where two families with diverse lifestyles interchange wives for two weeks. Likewise, she also worked in the movies “Let Me Out,” “The Magician” and “Night Terror”.

Besides her acting and modeling career, she is the co-owner of Travelhost Orlando magazine. Siegel considers it is essential to give back to the community and has noted philanthropic involvement.

Her contribution includes working on the Board of Directors and fundraising for many charitable organizations such as the Westgate Resorts Foundation, the Mennello Museum of American Art, Special Olympics Florida, the Orlando Ballet, and among others.

Siegel is a happily married woman. She and owner of Westgate Resorts, David Siegel are married since 2000. Although she is not Jewish like her husband, the couple got married in a Jewish ceremony. The couple together owns Orlando Predators, a professional arena football.

In 2015, her daughter, Victoria was found dead in the family´s mansion in Florida due to the overdose of prescribed medication. Moreover, she became a part of controversy for taking pictures of her daughter’s coffin while having a soft drink.

A spokesman for the family tried to defend her by saying that people deal with grief in different ways. In her spare time, she is seen painting, skiing and playing tennis with her children.

Furthermore, Jackie was briefly involved with Donald Trump back in the late ’90s. She claims they were never serious, but went on a “couple of dates” after he invited her to his parties. She also supported his electoral campaign in 2016 and once said of Trump:

“He’s a really great person. So much charisma. I’m so glad that we’re still friends.”

As a wife of a very successful businessman, David A. Siegel, she is enjoying her luxurious life with her family in Windermere, Florida, United States. As of now, her husband’s estimated net worth has 4.9 billion.

She has four pet namely, Bear, Louie, Bebe,  and Zen.  Moreover, She is earning her handsome amount of money and is living a celebrity life so far.