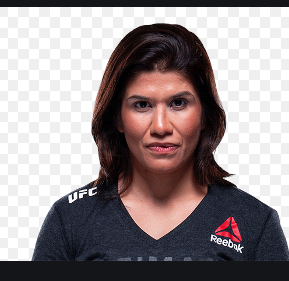 Well, Aguilar is openly lesbian, as she is in a romantic love relationship with her girlfriend since 2012 and is also engaged to her lesbian fiance.

Jessica Aguilar was born on 8th May 1982 to American-Mexican parents. She grew up in the city of in Mexico and did her education there. She holds the citizenship of the United States and Mexico.

She stands 5 feet 4 inch tall, Aguilar is a fitness freak and has managed the athlete body of 115 Ibs. She is quite dedicated to her work and gives her full potential to it.

In the year 2006, Jessica Aguilar made her professional career as a mixed martial artist. In her debut match, she fought against Bellator Fighting Championship, Lisa Ellis. It was a loss for her by submission due to a rear-naked choke in the second round.

Next, she faced Lindsay Ketchum, Tamera Arnold, Sumie Sakai and Angela Magana in the Combat Fighting Championship and all the fight turned out to be a great success for her.

For the first time, she fought in the BodogFight: Vancouver held at Vancouver, British Columbia, Canada, on 25th August 2007. She couldn’t win the match against Brazilian mixed martial artist, Carina Paganini Damm by 4-2 point.

On 23rd June 2010, she signed Bellator Fighting Championships and participated in the promotion of the 115 Ibs women’s tournament. There she made a debut at Bellator 24 against American mixed martial artist, Lynn Alvarez, on 12th August 2010.

Till date, she has participated in six Bellator Championship and has won five of them but couldn’t defeat first Bellator Women’s Champion, Zoila Frausto. Later, she has a rematch in a non-title but withdrew due to her foot surgery in the fight against Esparza. The same year, she won a Gold Medal in Grappling World Championships Women’s Senior No-Gi, in 2010.

Jessica Aguilar in World Series of Fighting and UFC

On 22nd November 2013, Aguilar made her entry by signing in World Series of Fight and was the first female to do so. Not only this, she won her debut match in the WSOF Women’s Strawweight Championship against Alida Gray.

After facing several competitors, she signed Ultimate Fighting Championship (UFC) on 11th June 2015. She has fought in two of the UFC event but both the time she lost the match. Likewise, she was to face Livia Renata Souza, a Brazilian Mixed Martial Artist, and Invicta FC Strawweight Championship somehow, she couldn’t do so because of her hand injury.

Being a successful mixed martial artist, Jessica Aguilar has won several awards and achievement in her entire life. She once reached in the Bellator Season 3 Women’s 115 Ibs Tournament Semifinals.

This 35-years-old, Jessica Aguilar is pretty uptight when it comes to her love affairs and relationship. However, she has made it clear to the world that she is a lesbian and not available aka she is dating her long-term girlfriend, Elena Daniele, since 2012.

Although she has not yet revealed much more information regarding her girlfriend in social media. Looks like she doesn’t want to share her personal life throughout the world.

Jessica Aguilar is one of the successful American mixed martial artists who has earned both name and fame through her career. As of 2018, she charges around $35,000 as a basic salary including bonus, official UFC Reebok sponsorship and so on.

Currently, she ranks #11 in the UFC Women’s Strawweight division and her salary is soon to increase in near future. Her awards and medal are also listed as one of her net worth too.

There is no doubt that she lives a luxurious lifestyle in the house located in Coconut Creek, Florida with her family. She has got two pet dogs in her house.