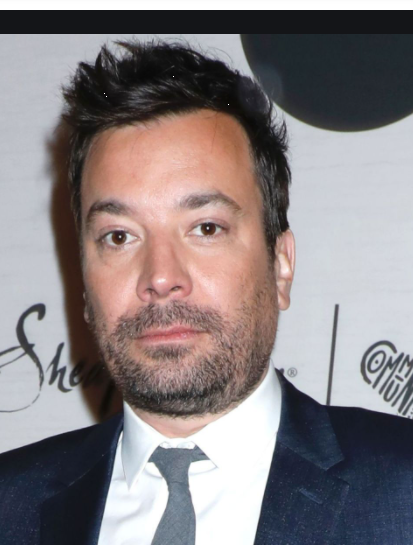 Jimmy Fallon is a singer, actor, comedian, television host, and producer who is widely recognized for his impressions of Chris Rock, Jerry Seinfeld, and Adam Sandler on Saturday Night Live. He is also known for hosting a talk show, Late Night with Jimmy Fallon which he took over for Jay Leno, Comedian after working for almost five years.

Jimmy Fallon is married to wife Nancy Juvonen. The husband and wife are blessed with two daughters. Read more about his early life, career, net worth, salary, and so on.

Jimmy Fallon was born on 19th September 1974, in New York City, to Sr.James Fallon and Gloria Fallon. His father was a street singer who also worked as a machine repairman for IBM. He has a sister, Gloria Fallon. Regarding his nationality, he is American and is of German, Norwegian and Irish descent.

Fallon attended the Roman Catholic school at St. Mary of the Snow in order to be a priest but he got more interested in comedy and music. Afterward, he joined Saugerties High School where he performed in the most stage productions and also won a young comedian’s contest with an impression of comedian, Pee-Wee Herman.

Jimmy Fallon then joined The College of Saint Rose where he majored computer science. However, he later dropped out from there and move to Los Angeles in order to pursue comedy full-time.

Jimmy Fallon started his comedy career after joining classes with the Groundlings. At that time, he often did stand-up comedy at the improve earning $7.50 per set. Besides, he also made an appearance in the feature film, The Scheme.

With an aim of joining American television show, Saturday Night Live, Fallon auditioned for the program in 1997 after working two years at Groundlings but was unsuccessful. However, in his second attempt, he was successful to win the attention of many judges including head writer, Tina Fey. Right after that, he was hired as a cast member for the two seasons in 1998 but remained until the 2004 season.

These are just some of the awesome women I work with at the Tonight Show – without them there would be no Tonight Show. Thank you! #InternationalWomensDay #FallonTonight pic.twitter.com/hQLOrfLGCh

Later on, Jimmy then made an acting debut. He appeared in the movies such as Fever Pitch, Whip it, and Factory Girl. Moreover, Fallon also hosted the television show, Late Night with Jimmy Fallon for which he won Primetime Emmy Awards.

Not only that, he also released the comedy albums, The Bathroom Wall and Blow Your Pants Off. The album reached #1 on the US Comedy Chart and won a Grammy Award for the Best Comedy Album. Fallon also released the books, Snowball Fight, Thank You Notes, Everything is Mama, Your Baby’s First World Will Be DADA and so on.

As of now, Jimmy Fallon has appeared in the multiple television series and films. Some of them are

The handsome and multi-talented personality, Jimmy is married to a beautiful woman, Nancy Juvonen. The couple got married on 22nd December 2007. Nancy is a co-owner of a production company, Flower Films. The couple started dating each other after meeting on the set of the romantic comedy film, Fever Pitch.

[ CAPTION: Jimmy Fallon and his wife, Nancy, and family ][ SOURCE: ]

Jimmy Fallon proposed Nancy in August 2007 at sunset on the dock of Juvonen’s family home. The couple got married four months later. Now, the couple is blessed with two daughters, Winnie Rose and Frances Cole Fallon.

[ CAPTION: Husband and wife, Jimmy and Nancy with their two daughters][ SOURCE: Dailymail ]

The husband and wife have been together for almost 11 eleven years and till the date, they have maintained their relationship very strong.

Instagram: Jimmy with his wife and two daughters, spending time together;

When you stayed at the aquarium a liiiittle too long. #FamilyVacation

Apart from their relationship, the couple has not involved in any other relationships and neither there has been any news or rumors regarding their extra love affair.

[ CAPTION: Husband and wife, Jimmy and Nancy with their two daughters ][ SOURCE: dodoodad ]

Jimmy Fallon makes a tremendous amount of money from his multi-professions, especially from comedy. Besides, he has also won numbers of awards including Teen choice, Primetime Emmy, Critics Choice, Grammy, People’s Choice Awards and so on which has boosted his net worth.

As of 2018, his net worth is estimated at around $45 million. As of his past records, he earned a salary of almost $11 million per year for hosting the talk show, the Late Night.