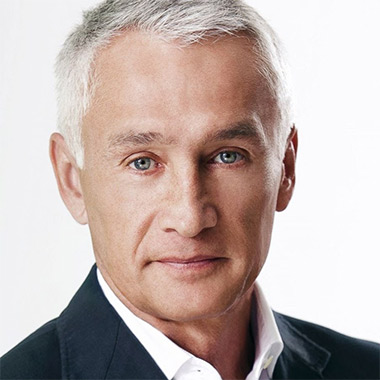 The 25 most influential Hispanics in the United States and one of the most famous television personality in America, Jorge Ramos was born on March 16, 1958, in Mexico City, Mexico. He is famous as an American-Mexican author and journalist. He is also known as the anchor of Noticiero Univision which is a Univision news television program. He also hosts ‘Al Punto,’ a political news program and ‘America with Jorge Ramos’.

Jorge Ramos attended the Universidad Iberoamericana located in Mexico City; majored in communications. In 1983, he left Mexico and went to Los Angeles, California on a student visa. While he was in Los Angeles, he planned to enroll in UCLA extension journalism classes. He also attended the University of Miami in Miami, Florida and earned a master’s degree in international studies.

Jorge joined KMEX-TV in 1984. KMEX-TV is an affiliate of Univision located in Los Angeles. He then hosted Mundo Latino for KMEX’s morning program for two years. Since then he his worked in different stations, including Univision, ESPN Deportes, Fox Sports, Telemundo and also other. Within his career, he has interviewed many personalities, many leaders of multiple worlds, including Bill Clinton, Bill Gates, Terry Porter, Barack Obama, Fidel Castro, Bill Gates, George W. Bush, Hugo Chavez, Rafael Correa, Evo Morales, Fernando Ferrer and other celebrities. In 1986, Ramos joined Noticiero Univision as their anchorman. He there worked alongside colleague Maria Elena Salinas.

Currently, Jorge Ramos works as the host of Al Punto, a public affairs program which is aired on Univision. He has many contributions towards the journalism career and covered the fall of the Berlin Wall, the 9/11 terrorist attacks and the disintegration of the former Soviet Union. He is also the founder of Despierta Leyendo in 2002. He has represented Univision in a Democratic debate between Barack Obama and Hillary Clinton on 21 February 2008, on The University of Texas at Austin campus in Austin, Texas.

Ramos has married twice and divorced with both wives. He had one daughter, Paola Ramos from his first wife, Gina Montaner. In 1992, he remarried he Lisa Bolivar in a Roman Catholic ceremony at the Cathedral of San Juan Bautista in San Juan, Puerto Rico. They had one son named Nicolas Ramos and divorced in 2005. He is now, in a relationship with Chiquinquira Delgado, a famous Venezuelan actress as well as a TV host. Prior to this, he has dated many celebrities including Ana de la Reguera, Mexican actress.

Ramos currently resides in Coconut Grove, Florida which is outside of Miami. At the age of 50, he became the citizen of United States in 2008. Some of the famous books are Dying to cross, The Other Face of America, Detras de la mascara. In addition, Ramos has won eight Emmy Awards and also won the Maria Moors Cabot Award for his excellence performance in journalism.

Ramos is active on Twitter, where he tweets current issues and his personal interest and has millions of followers but he follows only 122 people. His successful career and his dedication have earned him a net worth of $12 million with an annual salary of $3 million.