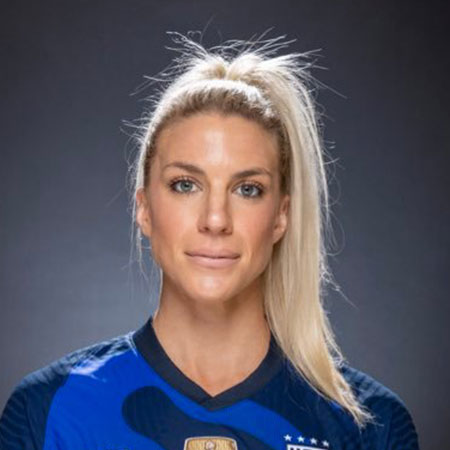 Julie Beth Johnston, often known as Julie Johnston, is a soccer defender who has been playing for American Women’s national team and the Chicago Red Stars on National Women’s Soccer League. Born on April 6, 1992 in Mesa Ariozona as a daughter to David and Kristi Johnston, Julie was captain of United States under-20 women’s national soccer team, when the team won 2012 FIFA U-20 Women’s World Cup. She also helped under 23 team win 2013 Four Nations Tournaments in LA Manga, Spain. In 2015 FIFA Women’s World Cup, she was member of United States Women’s national soccer team. She has played club football from Arsenal GSC, Sereno Soccer Club, Santa Clara Broncos and Chicago Red Stars. She is considered as the one of the highly skilled defender of the U.S. women’s national team and she appears as the strong wall for the opponent team.

Johnston was born and raised in Mesa, Arizona along with her elder sister Melanie Johnston. Her sister is also soccer player who played Division 1 soccer before she went through hip surgery. Soccer has always been important in Johnston’s family. She attended Dobson High School in her home town. During her career as a junior player, she played for Arsenal girls soccer club in Under-9 and Under-12 tournaments. Similarly she also played under-13 through under-19 from Sereno Soccer Club and being a captain of Sereno she helped the club to win the state title nine times.

From Club to International

Academic qualification has always been important for Johnston. She joined Santa Clara University and graduated with majored in communication. During her University days, she played from Bronco’s women’s soccer team. As a college freshman, she made her appearance in 20 games with 5 assists. As a second-year university student, she played in 21 games for Broncos, starting all the games with nine goals and four assists. Among nine goals she scored for Broncos, four were winning goals. Since 2014, she has been playing for Chicago Red Stars and in the first season at Red, she started in all 21 matches with two goals. In her international, she has played against Switzerland, England, France, Spain, Costa Rica, Haiti and New Zealand. In 2012, she scored goal against Switzerland from under-20 youth soccer that led the team to the 2012 FIFA U-20 Women’s World Cup. Johnston was a member of U-23 team when the team won Four Nations Tournamnet in La Manga, Spain.

Talking about her professional life, Johnston has been in relationship with her boyfriend Zach Ertz, who has been playing in NFL for the Philadelphia Eagles. Johnston met Zach during college at a Stanford baseball game and they got engaged on the same stadium where they met. Johnston has height of 5’7’’ and being a soccer player she does not have to worry about her body physique. Through her professional soccer career, she has made net worth of $1million. Johnston frequently reacts with her through social networking sites such as facebook, instagram and twitter.