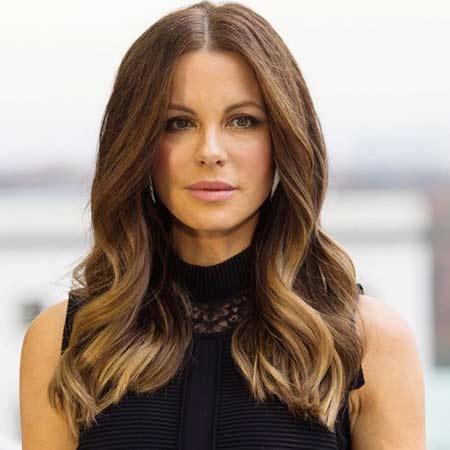 Kate Beckinsale is an English actress best known for her mesmerizing performance in the action film series, Van Helsing Whiteout and Total Recall. She is also known for her work in the Underworld series.

Beckinsale is a gorgeous actress and a beautiful lady. She has married once and dated twice in her lifetime. For now, she is single and occupied with her professional life.

Kathrin Romary Beckinsale aka Kate Beckinsale was born on 26 July 1973 in Chiswick, London, England. Her father Late Richard Beckinsale, as well as mother Judy Loe, is a well-known actor. She was raised by her mother and step-father Roy Battersby along with her step-siblings.

She completed her high school education from Godolphin and Latymer School in West London. She read French and Russian Literature at New College, Oxford. She studied in Paris as a Modern language student. During her teenage days, Kate went through anorexia and underwent Freudian Psychoanalysis for four years.

Beckinsale began her acting career playing the minor role in television series. She made her screen debut with an episodic series This is Your Life when she was only four. She made her film debut in 1993 portraying the role of Hero in Much Ado About Nothing.

Besides acting, Kate has served as a model for the music video and TV ads including Waltz Away Dreaming, Absolut Vodka, and Lux shampoo. She lent her voice in the Videogame, The Elder Scrolls Online and radio shows like Emma, The Proposal and Romeo and Juliet.

Kate is not only adored for her beauty and charm but is also praised for her outstanding work. She is an actress with a wide range of accomplishment throughout her career. In 1997, she was awarded the Best Actress award for Supporting Actress in 1999. Furthermore, she garnered Spike Guys Choice Awards for Underworld: Awakening and London Film Critics Circle Award for Love & Friendship.

Personal life of Kate is as interesting as her professional one. She was in a long-term relationship with an actor, Michael Sheen since 1995. The duo met on the set while filming The Seagull.  She has a daughter named Lily Sheen with Michael in 1999. After living together for eight long years they decided to part their ways in 2003.

After her divorce with Sheen, Kate started dating director Len Wiseman. They met while filming the film Underworld and soon tied the knot on May 9, 2004, in Bel-Air, California. The couple stayed as a husband and wife for 11 long years and split up in 2015 while Len filed the divorce in 2016. The reason behind their separation was stated as irreconcilable differences.

Kate stayed single for quite a while after splitting from her ex-husband Wiseman. She finally moved on from her divorce and grabbed the attention of media again when was seen hanging out with her new boyfriend, Matt Rife since June 2017.

Matt is a 22-year-old stand-up comedian and the youngest cast of the show Wild ‘N Out. The rumor sparked more when the lovebirds were spotted kissing during their date inside AMC Century City 15. However, their relationship didn’t last long as they made it their final break up in August. As of now, she is taking a break from all the drama and enjoying her single life.

Starting her career playing the minor role in TV series, Beckinsale crawled her way up to the lap of luxury with her skill, talent and hard work. She is a well-established actress of Hollywood and holds the staggering net worth of $16 million currently. Her annual income is reported to be $3 million.

The stunning actress, Kate is residing in the house worth $3 million in Los Angeles. She also owns few cars like black Chevy Suburban and Pontiac Grand AM. No wonder she is living a lavish life and maintaining a classy and trendy appearance.