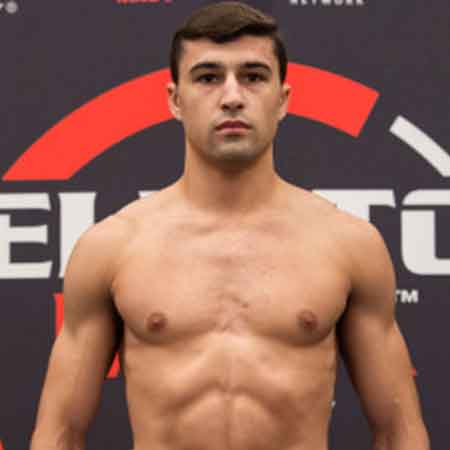 Khonry Gracie, an American mixed martial artist currently competes in the welterweight division of Bellator Fighting Championship. He is the son of MMA legend Royce Gracie. Khonry is from the famed Gracie family who helped develop the modern Brazillian Jiu-Jitsu. He began his professional MMA career in 2018.

Khonry Gracie is a single man. He has not had public relationships so far. To know more about the fighter’s early life, education, career, net worth, relationships, family, dating life; keep scrolling.

Khonry Gracie was born on 23rd April 1997 in the United States to parents Royce Gracie and Marianne. His father is a Brazillian UFC Hall of Famer and an influential MMA legend. Khonry has two brothers Khor and Khydon and a sister Kharianna.  His parents got divorced in 2016. Regarding his nationality, he is an American of Brazillian descent.

As for education, Khonry attended high school. He played soccer during his youth but when it came to a career, he chose MMA. Well, the fighter grew up in BJJ mats, so it is not a surprise.

Gracie’s first amateur bout took place on September 22, 2017. He was pitted against Ben Clark under Attitude MMA Fights promotion. He won the bout via a unanimous decision. Throughout the nine-minute fight, Khonry showed good fighting skills.

Soon, the fighter signed with Bellator MMA. His father is also involved with the promotion. Khonry was able to sign with a big promotion at the start of his professional career. His professional debut took place on January 20, 2018, at Bellator 192. He fought against rookie Devon Brock. Khonry was defeated via unanimous decision.

So, for now, the fighter has a professional record of one loss. Furthermore, he has a brown belt in Brazillian Jiu-Jutsu. It is his main fighting style as well.

The 21-year-old fighter is not married yet. He is also not dating anyone at the moment. Khonry has not made his relationships public so far. He could be dating someone in private but as of now, there have been no such rumors. Aside, Khonry is busy with his career right now. He has just gone professional. So, he might not have time for romance. But check out this photo of him with his friends.

Furthermore, the fighter has a close relationship with his father. He is proud to be a member of Gracie family. He looks forward to continuing the family legacy.

Khonry has just begun his career. He doesn’t have a very steady source of income right now. He has only fought once professionally. The fighter earned $10,000 for the fight according to sources. The exact figures of his salary and net worth are not disclosed yet. His father, on the other hand, has a net worth of $5 million.

The fighter is still active in his career. We can expect to see more of him in upcoming days.