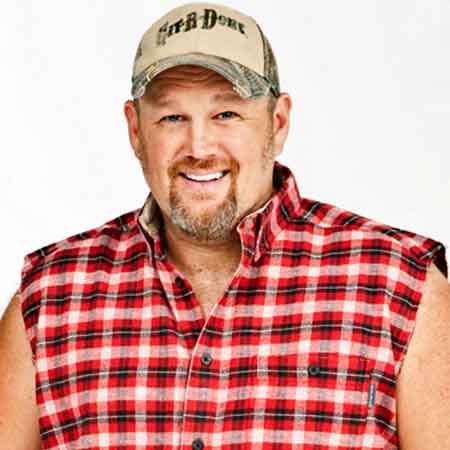 An American stand-up comedian, actor, producer, country music artist and former radio personality, Lary the Cable is a multiplatinum recording artist, Grammy nominee, Billboard award winner and one of the top comedians in the country.

Among his several comedy albums, three of this albums have been certified gold by the RIAA. Daniel married his long-term girlfriend, Cara, and welcomed two children together.

Larry the Cable Guy aka Daniel Lawrence Whitney was born on 17th February 1963 in Pawnee City, Nebraska, USA. He was born to his father, Tom Whitney, a guitarist as well as a Christian minister, and mother, Shirley Whitney, and raised on a pig farm.

Daniel completed his high school graduation from The King’s Academy School in Florida in 1982 and attended the Baptist University of America and the University of Nebraska-Lincoln. He pursued his degree majored in drama and speech.

Larry started his career journey in a radio. He often made radio appearances in the shows such as The Ron and Ron Show, The Bob and Tom Show, The Chris Baker Show, The Todd and Tyler Show, etc. He also made a frequent appearance in The Johnny Dare Morning Show broadcast on 98.9/KQRC from Kansas City.

As Larry came in limelight from the radio, he stepped into a Stand-up career. He was able to win the heart of millions of people as he got the nickname the Cable Guy. Eventually, after long hard work, he released his first two comedy albums, Lord, I Apologize in 2001 and The Right to Bear Arms in 2005, which was certified gold by the RIAA.

Similarly, his third comedy album Morning Constitutions was released in 2007 which was able to grab the huge attention of people. His travelogue series Only in America with Larry the Cable Guy was released on 8th February 2011 which was broadcast from the History Channel.

Larry the Cable Guy also known as Daniel Lawrence Whitney’s mind-blowing sense of humor and performance won the heart of millions of people as well as several awards and nominations. He was nominated for Worst Actor for Larry the Cable Guy: Health Inspector, Worst Actor, and Worst Screen Couple for Witless Protection.

Similiarly, he was also nominated twice as a Worst Screen Combo and Worst Supporting Actor for A Madea Christmas. His performace in The Right to Bare Arms and Blue Collar Comedy Tour: One of the Road made him a nomination for Grammy Award for the Best Comedy Album.

Furthermore, Larry the Cable Guy has won the Visual Effects Society Award for the Outstanding Performance by a Animated Character in a Animated Motion Picture for the movie Cars in 2007.

Daniel Lawrence Whitney married to his long-term girlfriend, Cara, after dating for several months. The couple tied the knot on 3rd July 2005 and welcomed two children together. They welcomed their son, Wyatt, on 2nd August 2006 and daughter, Reagan, on 29th October 2007.

Daniel Lawrence earns a good sum of money in his career. He also donate a huge sum of money for different charity and organization. Larry had donated money for the local high school to buy a new theatrical equipment. In 2010, Whitney donated $5 million USD to the Arnold Palmer Hospital for Children in Orlando, Florida.

Moreover, he also portayed different character in several animated movies. As a producer, Larry has also produced several television movies and documentary. Allocationg information from several sources, as of 2018 it is found out that Daniel Lawrence Whitney well-kown as Larry the Cable Guy current estimated net worth is around $80 million.