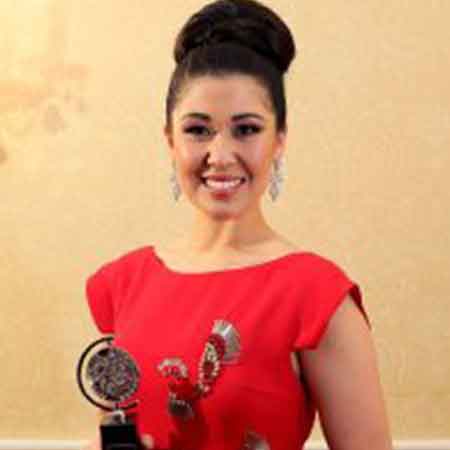 The Tony Award winner, Ruthie Ann Miles is an American actress as well as a singer. She is known for her portrayal role of Imelda Marcos in Here Lies Love for which Miles won a Theatre World Award and a Lucille Lortel Award.

Ruthie Ann Miles was born on 21st April 1983, in Arizona, United States. Her mother Esther Wong is a music teacher first in Korea and, from 2nd grade, in Honolulu, Hawaii.

Miles’s breakthrough came after she portrayed the role of Imelda Marcos in Here Lies Love for which she won a Theatre World Award and a Lucille Lortel Award. Moreover, he also appeared in Sweeney Todd (as Adolfo Pirelli), Annie and I Am Michael.

In 2015, Miles portrayed the role of Lady Thiang in the Broadway revival of The King and I. For her role, Miles won a Tony Award and an Outer Critics Circle Award. Moreover, she was also nominated for Drama League Award. After her fatal accident, Miles is set to reprise her role in The King and I in June 2018.

The 35 years old renowned actress Ruthie Ann Miles is married to Jonathan Blumenstein. Miles tied the knot with Jonathan in 2011. The couple welcomed their first child, a daughter Abigail Blumenstein on January 4, 2013.

But on March 5, 2018, Miles faced a fatal car accident while crossing a street in Brooklyn, New York. In that accident, Miles was severely injured and she further lost her five years old daughter. At the time of the accident, Miles was 7 months pregnant with her second child.

However, Miles and Blumenstein lost their unborn baby girl on May 11, 2018, who was named as Sophia Rosemary Wong Blumenstein. Beside this, Miles hasn’t been in any other relationships.

Multiple awards winning actress Ruthie Ann Miles has maintained a standard life. She has starred in popular movies and television series. From her acting career, Miles has earned an astonishing amount of money.

At the current moment, Miles has an estimated net worth of $5 million. Because of her low profile in social media, it is hard to find out Miles’s daily lifestyle, house, and cars.