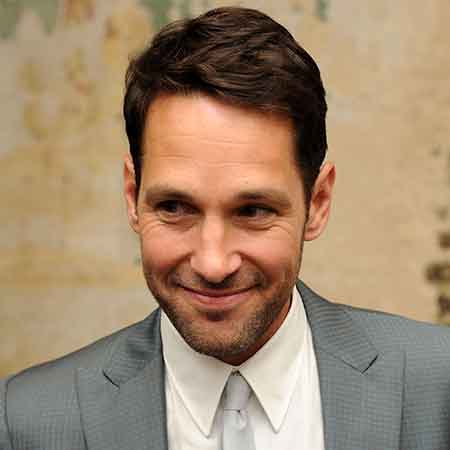 Paul Rudd is an American actor, comedian, producer, and writer, best acclaimed for his roles in the Films, I Love You Man, Anchorman, The 40-Year Old Virgin, and so on. Besides, he is also one of the Marvel Cinematic Universe characters who plays the superhero Ant-Man. Rudd is set to reprise his role in the upcoming movie, Avengers 4.

Paul Rudd married a television producer, Julie Yaeger. The husband and wife are blessed with two children a son, Jack Sullivan and a daughter, Darby. The couple has been living together for almost fifteen years. Well, in this digest we will be revealing detail about Paul and his personal life, early life, career, net worth and much more. Stay with us!!!

Paul Rudd was born on April 6, 1969, in Passaic, New Jersey, to Gloria Irene, mother, and Michael Rudd, father. His father was a tour guide and former vice-president of Trans World Airlines whereas her mother was a sales manager at the television station, KCMO-TV. His parents both were Jewish immigrants who moved to Britain from Russia, Belarus, and Poland. Regarding his nationality, Rudd is American and is of mixed ethnicity.

Rudd first completed his primary education at the Broadmoor Junior High School and then graduated from Shawnee Mission West High School. Afterward, he joined the University of Kansas where he majored in theatre.

At that time, he was also a member of the Sigma Nu fraternity’s Nu Chapter. With an ambition of being an actor, he studied at the American Academy of Dramatic Arts/West and also spent three months studying Jacobean drama at the British American Drama Academy.

Paul first made onscreen appearances in the television series, Sisters portraying a role of Kirby Quimby Philby. Three years after her onscreen debut, he then made an appearance in the film, Clueless. He also appeared on the NBC sitcom Friends, where he played the role of Mike Hannigan, Phoebe Buffay’s boyfriend and later husband for the final two seasons.

Moreover, Rudd also is regularly featured on the Tim and Eric show. In 2015, Paul appeared in the blockbuster movie Ant-Man which earned $518 million at the worldwide box office.

Rudd has made multiple television series appearances as well as films. Some of them include

In 2015 Rudd was awarded as a  star on the Hollywood Walk of Fame at 6834 Hollywood Blvd. Besides, he was also nominated for a Saturn Award in 2016 for Ant-Man and has been nominated for multiple MTV Movie + TV Awards and a Screen Actors Guild Award. More recently, he appeared in the films Ant-Man and the Wasp and is working for his upcoming Avengers film. Similarly, he has been Eyed For Lead Role In Sonic the Hedgehog Film.

The couple is living a happy life. They have been more than 15 years living together and still, they have not involved in any external marital-affairs and neither, there has been any serious conflict between the couple which would lead to divorce.

Paul Rudd has accumulated a tremendous sum of money from his acting professions. In 2015, he made an appearance in the blockbuster movie Ant-Man which earned $518 million at the Worldwide box office. Besides, he was paid in million dollars for his role in the movie.

As of 2018, his net worth is estimated at around $30 million. Besides, he also owns numbers of cars including Audi.