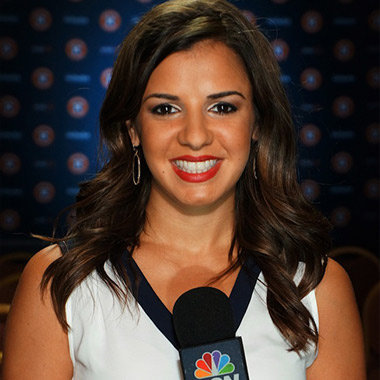 Leila Rahimi is a reporter and anchor at Comcast SportsNet, the television home that broadcasts the most comprehensive coverage of the Chicago Blackhawks, Bulls, Club, and White. She has been associated with SportNet since October 2015 and before that she has been working under various big networks.

Leila Rahimi was born and raised in Texas and she completed her high school education from Texas.

Having a keen interest in journalism, she attended the University of North Texas in 1999 and studied journalism there. She graduated with B.A Journalism in 2002. During her days at the University, she was involved in various clubs and societies. She held the position of KNTU-FM News North Texas Daily Eagle Ambassador.

She started her professional career in journalism in June 2001, joining Fox Sports Net.For Fox Sports Net, she served as the Associate producer. At the beginning, she worked in regional news and later served creative service departments. She worked in the position for almost four years before she was offered a job at KYTX-TV in April 2005. She served KYTX-TV as a news reporter for Longview bureau. She spent 16 months at KYTX-TV and then moved to KXII-TV in August 2006. In KXII-TV, she served as a sports reporter and news anchor. She appeared on the weekend news as an anchor for KXII-TV. In between 2007 and from 2011, she worked as the freelance sideline reporter for Fox Sports Net for four years. In November 2007, she started her career at KXAN-TV as a sports reporter. She worked for the TVC for 4 years and 5 months.

After gaining experience at various networks, she joined Fox Sports San Diego in March 2012 and started to work as a sideline reporter. During her tenure at Fox Sports, she interviewed numerous players and coaches and presented pre-game and post-game analysis.

In October 2015, she was officially hired by SportsNet as its newest on-air talent member for the nightly sports news program, SportsNet Central. Since then she has been handling anchoring duties, along with reporting various local professional, collegiate and high school sports feature. She began her on-air duties from October 29, 2015, on Comcast SportsNet. For her works, she has been nominated for Emmy-award multiple times. She covered numerous big events such as the Rockets’ trip to Asia. She has also experience serving as the field reporter for Fox Sports San Diego’s baseball telecasts. Additionally, she also hosted magazine-style programs and recently anchored and hosted for the MLB Network’s Strike Zone Channel.

Rahimi has not spoken any word about her married life, children, and affairs. Even it is very hard to say whether she is married or not without any proper information. She has perfectly maintained body physique and she might have been the point of attraction for many men. Rahimi prefers to interact with her fans and audiences via twitter and Instagram and more information about her professional life can be found on her official website.