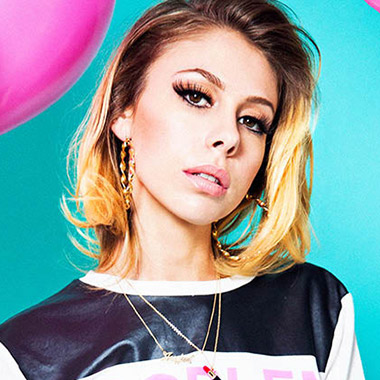 Lil Debbie is an American model, rapper as well as fashion designer. She is mainly known as the part of the group The White Girl Mob along with rappers V-Nasty and Kreayshawn. She then started his solo career by releasing a series of singles with rappers V-Nasty and RiFF RaFF. She then released her first EP “Queen D” in October 2013. She then released her second EP titled “California Sweetheart” which is followed by California Sweetheart Pt. 2. She released her second mixtape Young B!tch in November 2014.

Lil was born on February 2, 1990, in Albany, California, United States. Her birth name is Jordan Capozzi but she is famous with her stage name Lil Debbie. She belongs to Italian descent. She holds dual citizenship i.e. Italian and American. She went on to study fashion design at FIDM after her graduation from high school. According to her “having too much homework” she dropped out from FIDM. She met Kreayshawn and V-Nasty when she was only 15 years old. She used to spend most of her time with them and use to consider them as her sisters. They together created the girl group called The White Girl Mob.

She appeared in the debut single music video “Gucci Gucci” of Kreayshawn in 2011. As of March 2015, she received more than 49 million views on YouTube. She was reported as being kicked out of The White Girl Mod in September 2011. She was kicked out because of being disloyal to the other members of the group. The main reasons for her departure were because of the poor communication and misunderstandings in the group. According to her, she didn’t have much input in the group and she just followed the decisions of the others. As of 2014, she has no relationship with the members of the group. She then collaborated with Houston rapper RiFF and RaFF in 2012. They together worked on a number of songs together which includes ‘Michelle Obama’, ‘Squirt’, ‘Suckas Askin’ Questions’ and ‘Brain Freeze’. Her videos for ‘2 Cups’, ‘Squirt’ and ‘Gotta Ball’ gained over 2000000 views on YouTube becoming viral successes. The success of her videos helped her to uplift her career

Lil Debbie is active on several social networking sites such as Snapchat, Twitter, Facebook, and Instagram. Her successful career has earned her a net worth of around $300,000 dollars as of 2016.