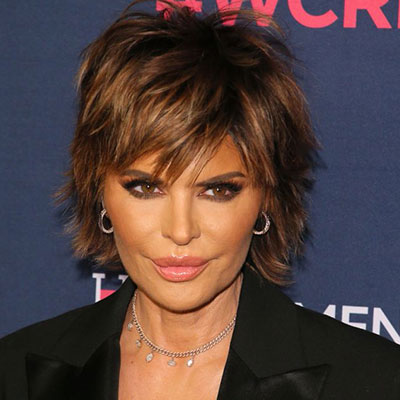 The diva of Bravo’s The Real Housewives of Beverly Hills, actress Lisa Rinna is known for her popular roles in Days of Our Lives and Melrose Place. She has also appeared in Donald Trump’s The Celebrity Apprentice and Dancing with the Stars.

She got married to husband, Harry Hamil in 1997. The couple has two daughters together, the elder is named Delilah and the younger is named Amelia.

Born on 11th July 1963, in Newport Beach, California, the United States, Lisa Deanna Rinna father is Frank and mother Lois Renna. Till she was seven years old, Renna grew up in Newport but the family was relocated to Medford, Oregon.

The relocation was due to her father’s job. Lisa there attended Medford Senior High School in 1981. At the high school, Renna was involved in the school’s drama club and also in other activities.

After her graduation, she opted out of higher education and moved to San Francisco, California to pursue her career as a model.

After coming to California, Lisa did a few modeling deals, she was also seen on John Parr’s music video ‘Naughty, Naughty’. However, her big break was when she was cast in the role of Billie Reed in the famous soap opera Days of Our Lives.

She was also seen in The Hogan Family. Her another widely famous role was I Aaron Spelling’s Melrose Place. She was on the show from 1996 to 1998. She was also the cast member in highly viewed teen-crime drama Veronica Mars.

She was also seen in the Good Advice in which she shared the screen with Charlie Sheen. She also appeared in an episode of HBO’s Entourage.

In 2002 Lisa started her own daytime talk show Soap Talk, she received an Emmy nomination for the show. But it was canceled after four seasons due to low ratings.

Then Rinna made appearances in shows like Dancing with the Stars, she was eliminated in the seventh round. She also participated on the Celebrity Apprentice, twice. She was invited to be a guest judge in the RuPaul’s Drag Race.

In 2014, she was cast on The Real Housewives of Beverly Hills for its 5th season. Lisa has also done nude plus a cover shoot for the Playboy magazine. She did the shoot while she was six months pregnant and the issue was titled as Melrose Mom.

Lisa’s affairs can be traced back to 1989 to Peter Barton. After her breakup with Peter in 1992, she was in a relationship with her ex-boyfriend, Todd Nelson.

Lisa met her husband Harry Hamlin while she was in the drama Movie Stars where she had a guest role. After they met on set, they shared liking to each other and began dating.

She got married to Harry in 1997. The couple has two daughters together, the elder is named Delilah and the younger is named Amelia.

It is estimated that Lisa’s net worth is approximately $8 million USD. Her role in Days of Our Lives and Melrose Place was very popular, so its evident that she got paid a lot, plus Bravo is known for playing its Housewife a very generous sum of money.

Besides having a successful modeling and acting career, Lisa and her husband own Belle Gray clothing boutique. Lisa has performed expensive surgeries like plastic surgery, silicone plant, Botox injection, and Juvederm injections.