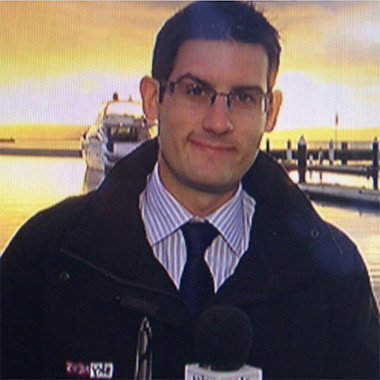 Luke Doherty is an Australian sports journalist who has been working at Sky News since 2006. He currently holds the position of the Deputy Head of Sports and Sports Anchor at Sky News.

Early life and beginning of career

Doherty has a diploma in Journalism from Macleay college which he earned in 2013. There is not much information on his childhood days.

Doherty started his professional career from June 2003, when he joined The Weekly Times as the Freelance Journalist for 1 year. From July 2004 to October 2005, he worked for Seven Network Australia as a sports producer and reporter. Similarly, he worked as a freelance journalist and sports reporter in between October 2005 and June 2006, before he got a job at Sky News Australia.

He started his career at Sky News as a producer and reporter and later got promoted as a valued member of the on-air line-up. Luke has been covering various big sports event in Australia for Sky News such as the Socceroos World Cup qualifications, Asian Cup heroics and State of Origin series, ‘NRL & A-League grand finals. Similarly, he went to London during the Olympic Games along with other members of the Sky News team. He currently holds the position of Deputy Head of sport at Sky News and has been contributing in presenting bulletins, reporting live on location at major sporting events and in breaking news situation, getting stories to air on deadlines that are regularly 15-30 minutes apart and organizing outside broadcasts at major sporting events and breaking news situations.

Similarly, he has also been contributing as a writer and editor of sports package and news stories. Doherty also helps to manage a journalist’s team, presents produces and reports on stories with a local and global focus. He is also one of the skilled video journalist and editor of Sky News. His notable works at Sky News include co-anchoring Sky’s coverage of the 2012 London Olympics from the host city.

Luke Doherty might have earned good money from his successful tenure but his monthly earnings and net worth have not been revealed yet. This young journalist has thousands of followers on twitter. There is no any information about his married life, affairs and children. It is hard to speak up about his marital status without any information. As a one of the impressive sports journalist in Australia, he has been able to add more excitement in the live game and coverage.

Doherty has been a valuable asset for Sky News and he has been one of the key personnel in Sky News. He plays the important role in covering various sports events throughout the globe for the Sky News. This hard working and multi-skilled journalist have been a source of inspiration for many young journalists who has been pursuing a career in sports journalism.