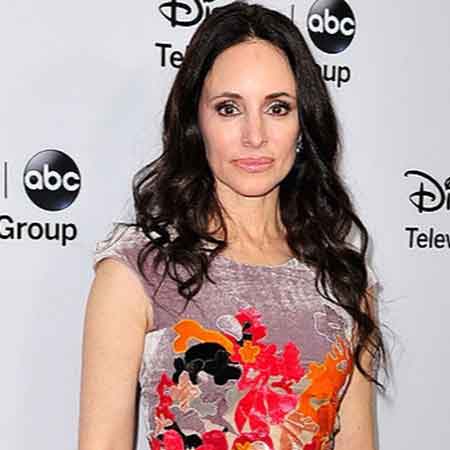 Madeleine Stowe is an American actress who appeared on television before her breakthrough role in the 1987 crime-comedy film, Stakeout. She was listed at No.5 as the Most Beautiful Woman in People magazine.

Madeleine is living a happy married life with husband, Brian Benben since 1982. The couple is blessed with a daughter- May Theodora Benben.

Madeleine Stowe was born on 18th August 1958, in Los Angeles, California, the U.S. Regarding her nationality, she is American and is of mixed ethnicity. She was raised in Eagle Rock- a suburb of Los Angeles.

Talking about her education, she studied Cinema and journalism at the University of Southern California. She was not that much interested in her classes so she volunteered to do a performance at the Solaris- Beverly Hill theater. There a movie agent saw her in the play and offered her for the appearance in TV and Films.

Madeleine made the first debut in an episode of the drama series, Baretta. She even played a leading role as Mary in the TV movie, The Nativity. She got her first breakthrough role form the film Stakeout as the film was made at No.1 at the box office.

In the year 1992, she appeared in the crime drama Unlawful Entry and the same year she played Cora Munro in The last of the Mohicans. And her critically acclaimed performance in the film elevated her from a former supporting actress to an A-List movie star. Because the movie grossed more than $75 million worldwide.

As mentioned above, in 1994, she was named one of the People Magazine’s “50 most Beautiful People in the World”. And form the year 1996, Madeleine postponed her acting career to concentrate her family life with her daughter- May Benben and husband- Brian Benben.

And finally, she came back in 1998 with The proposition and Playing by Heart. She even started in the science-fiction box office bomb Impostor.

And from the 2000s, she focused on motherhood as she never thought she’s retiring but she didn’t feel the thing because she was much more focused on her daughter May. She occasionally appeared in some of the TV productions.

But again in 2007, she appeared in the role of Dr. Samantha Kohl in Jeff Goldblum. She even starred in the Lifetime movie, The Christmas Hope in 2009. In 2011, she played Victoria Grayson on ABC’s television drama Revenge. She even was nominated for a Golden Globe Award for Best Actress- Television Series Drama for the role.

Madeleine Stowe tied the knot with husband Brian Benben in 1982. They met each other in the set of the NBC miniseries, The Gangster Chronicles.

They are blessed with a daughter-May Theodora. Since the date of their marriage, the couple is living a happy married life with each other. There is no any extramarital affair and other rumors regarding their divorce. Recently, they live west of Austin near Johnson City, Texas.

Madeleine Stowe has accumulated a decent amount of money from her acting career. She has featured in several movies and tv series through which she receives a good sum of money as salary. As per the report, her per episode salary of Revenge is $75,000.

Allocating information from several sources as of 2018 it is found out that Madeleine Stowe current estimated net worth is around $15 million. Besides this, she is also very active on social networking sites like Twitter, Facebook, and Instagram. And recently she is the set star in Fox’s musically-tinged drama pilot Mixtape.