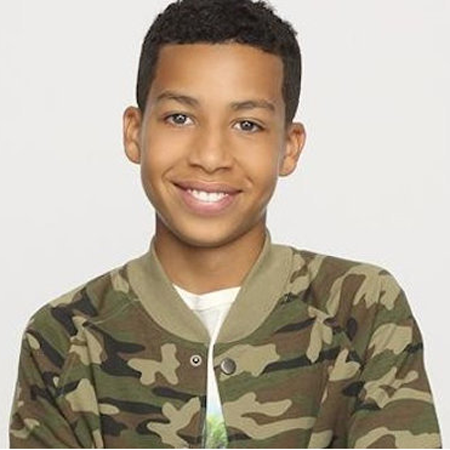 Marcus Scribner is an NAACP Image Award-winning American actor. He is well known for playing the role of Andre Johnson, Jr. in the ABC sitcom Black-ish. Similarly, Marcus Scribner is a philanthropist, works as the first Youth Ambassador for The Beaches Resorts and Sandals Foundation. His current relationship status is single.

Marcus is an unmarried boy. Being a young age, he has kept his personal life out of the spotlight, and it seems he is focusing career rather than a girlfriend. But has a good relationship with his co-stars and takes care of them.

Marcus Scribner was born to American parents on 7th January 2000, in Cedars-Sinai hospital, the same hospital where his mother was born. Marcus was born to father Troy Scribner, and he received his name due to his father’s love of Greek and Roman history and mythology.

With his father and sister during his childhood: Instagram

Marcus Scribner has a sister named Athena Scribner. His parents always motivated him to pursue a career in acting as he was interested in acting from his very young age. Currently, he is planning to attend the Stanford and the University of California Los Angeles.

Marcus Scribner made his acting debut at the age of 10, starring a guest role in an episode of ABC’s Castle in 2010. Although it was his first T.V series, he got positive responses, and his role became the solid base to start his career in the acting profession.

Marcus Scribner’s breakthrough role came in September 2014 when he appeared in an American sitcom tv show Black-ish, and the show became the highest-rated comedy of the season. On the show, Marcus Scribner plays the role of Andre (Junior) Johnson Jr.

Congrats to the #blackish cast for their @SAGawards nominations for Ensemble in a Comedy Series!!! pic.twitter.com/dhGR6FaqbW

Additionally, Marcus is an animation lover boy, and it is announced that Marcus will be in one of the leads in the upcoming teen feature Alexander IRL. Scribner is humanitarian works as the first Youth Ambassador for the Beaches Resorts and Sandals Foundation.

Currently, Marcus is 17 years old and is an unmarried boy. Being a young age, he has kept his personal life out of the spotlight, and it seems he is focusing career rather than a girlfriend.

But has a good relationship with his co-stars and takes care of them. In 2017, he posted a birthday message for his co-star Yara Shahidi along with a lovely picture of them.

Marcus Scribner also loves to enjoy with his family members and cares about them a lot. He shows his care about his family through his social media posts. He did post an adorable picture with his mother wishing her on the occasion of Mother’s Day.

Marcus Scribner has a huge success and stardom at a young age, and he already made his incredible performance in the multiple television series, movies, and commercials through which he earns a good sum of money.

Allocating information from several sources as of 2018, it is found out that Marcus Scribner current estimated net worth is around $1 Million. The efforts and achievements of his make us think that his net worth will increase in coming days.