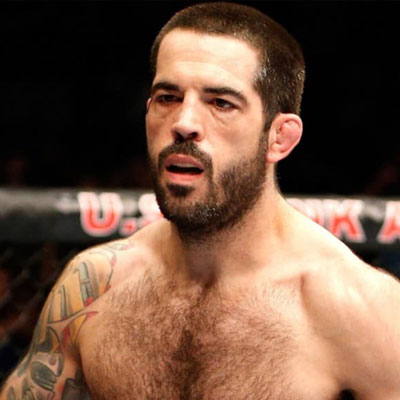 Matt Brown is one of the renowned American mixed martial artists who currently competes in the Ultimate Fighting Championship in the Welterweight division. He has won ISCF East Coast Welterweight Championship and 2017 best knockout of the year.

Talking about the personal life of Matt Brown, he is married to partner Colleen Brown. The husband and wife are blessed with twin boys born on 8th October 2010.

Matthew Bujon Brown was born on 10th January 1981, in Jamestown, Ohio to American parents. He was homeschooled for two years before attending Greenview High School. Living in a small town with no any better future, Brown grew up frustrated and got involved in drugs. By his early twenties, he almost died of a heroin overdose.

Before starting MMA career, Brown had several street fights where he also ended up beaten badly. He started making fighting progress after he got trained by former Brazilian mixed martial artist, Jorge Gurgel.

The following year, Brown was chosen as one of the thirty-two fighters to get a chance at a six-figure UFC contract with The Ultimate Fighter: Team Rampage vs. Team Forrest. There he fought against Josh Hall and won by TKO in the first round.

Later, he faced with Amir Sadollah in the quarter-finals but lost the match via triangle choke in the second round.

Jujutsu, Judo, Muay Thai, and Sanda fighter, Matt Brown made his UFC debut in 2007 at The Ultimate FInale 7. His debut fight was against Matt Arroyo which he won via TKO in second round. As of now, he has fought with several MMA fighters. Besides, he has set the MMA record of 21 wins out of 37 matches and won several titles including

Matt Brown is happily married to his wife, Colleen since 2010. The couple hitched after Matt was taken into custody by Mexican police. Now, the husband and wife are blessed with twin boys, Hunter and Conner.

The couple seems to be living a happy life. It has been almost eight years since their marriage and till the present context, the pair has persevered their relationship. Apart from their relation, both of them have kept themselves away from extra affairs.

Matt is also an avid heavy metal fan and he was in the crowd when former Pantera guitarist Dimebag Darrell was assassinated on stage while performing with his band Damageplan on 8th December 2004.

Tall and tough fighter, Matt Brown makes a  decent amount of money from his MMA career. As of now, he has fought in 37 matches out of which he has won 21. Thirteen wins via Knockouts, six via submission, and two by decision.

Allocating information from several sources, as of 2018, it is found out that Matt Brown’s current estimated net worth is around $4 million.