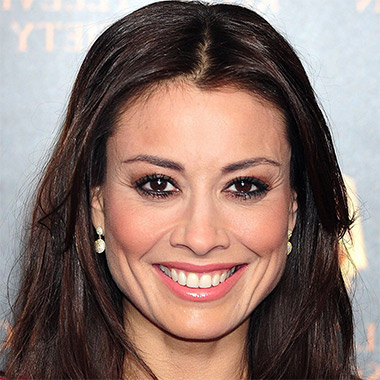 Melani Sykes is a talented and beautiful English television and radio presenter as well model, who has done modelling for various brands and commercials. As a TV presenter she had presented various high-profile shows such  as ‘The Big Breakfast’,  ‘I’m a Celebrity… Get Me Out of Here! and much much more.

Melanie Ann Sykes was born on 7th August 1970 in a small town in Aston-under-Lyne, Lancashire, England, UK. She is a cocktail of English father and a Catholic Anglo-Indian mother, named Wendy. She has two sisters. Her family has a keen interest in playing instruments and were the member of the Ashtonian Brass Band, where Skyes used to play baritone horn.

Melanie Sykes earned public attention in the mid-1990s when she appeared in the commercial of Boddingtons Brewery beer advertisements for her broad Norther accents. It was during this time, she has done modelling for Berlei Lingerie. Since then, she occasionally appeared in television commercials and shortly caught the eye of public.

Melanie Sykes’ television career started when she worked for the Planet 24’s production of light entertainment TV show ‘The Big Breakfast’ as the reporter; the show is broadcasted on Channel 4 and S4C. Ever since she began to present various shows including ‘I’m a Celebrity… Get Me Out of Here! and EastEnders Revealed.

Sykes presented a documentary for BBC Two on Asian culture in Great Britain called ‘Melanie Sykes’ Southall Stories’. She has also hosted various awards ceremonies such as the BAFTA Awards, the Q Awards, and Miss World.

In October and November 2005, Sykes appeared as a guest panellist on ‘Loose Women’ and later come back as a guest anchor in October 2008 and May 2009.

In 2008, Sykes appeared as the judge on GMTV’s ‘The Sofa Factor’. In August 2011, she returned to daytime television, co-hosting ‘Let’s Do Lunch with Gino & Mel’ and ‘Let’s Do Christmas with Gino & Mel’ alongside Gino D’Acampo on ITV. The show was cancelled in 2014.

On 13 September 2011, Sykes co-hosted the ITV series ‘Missing Millions’ with Paul Heiney. In February 2014, BT Sport announced that Sykes would be joining their MotoGP team, but in May due to some other work schedule, she departed from the channel.

In 2014, Sykes competed in the 14th series of ‘I’m a Celebrity…Get Me Out of Here!’ where she completed in third place. In 2015, she co-presented ‘Humble Pie’, a cookery series for Watch, with Marco Pierre White.

Melanie Sykes presented Unique the Production Company’s national radio chart show at the studios of London’s Heart 106.2 called ‘The A-List’. She served the show until the fall of 2006 and her position was eventually filled by Gail Porter.

Melanie Skyes began co-hosting the BBC Radio 2 show ‘Going Out With Alan Carr’ from May 2010, after Emma Forbes left the show. She hosted the show until its end in March 2012. Sykes also presented her own radio show on Capital FM for a short period of time.

Melani Sykes has appeared in print and television for the Britain ‘Head & Shoulders’ shampoo advertisements. She has also appeared in advertisements for Churchill Insurance, Morrisons and Wynsors World of Shoes.

In 2006, Melina Sykes co-wrote a book with Hilary Boyd titled ‘Blooming Beautiful: My Plan for Looking Great, Being Healthy and Surviving Hormonal Havoc, Throughout Pregnancy and as a New Mum’, which was published by Michael Joseph. In 2011, she posed naked for the December edition of men’s magazine Esquire. On 24 December 2013, on an episode of Let’s Do Christmas with Gino & Mel, Sykes and D’Acampo set the new Guinness World Record for “The most jumpers put on in one minute”. They managed to put on 11 jumpers in a minute.

Melani Sykes has her own line of lingerie and underwear with high street chain and retailer Debenhams. In June 2016, she launched a lifestyle website called melaniesykes.com which features food, lifestyle and fitness content as well as competitions and celebrity interviews.

Melani Sykes once married actor Daniel Caltagirone in January 2001, and the couple is blessed with two children named Roman (born 2002) and Valentino Luca (born 21 July 2004) who was diagnosed with autism in 2006. In July 2008, she reportedly split with her husband and final the divorced in June 2009. On 18 May 2013, Sykes remarried her boyfriend Jack Cockings at Sherborne Castle in Dorset.

In November 2013, Sykes was arrested and cautioned by police over an assault against Cockings. Soon after the domestic assault charges, after less than one year of marriage, Sykes began the process of filing for divorce. The common assault caution was removed from police records on 20 August 2014.

Melani Sykes’ successful career has earned her a net worth of $ 5 million dollars and receives a lucrative amount of salary mainly from her presenting works, modeling, her clothing line and other sources.