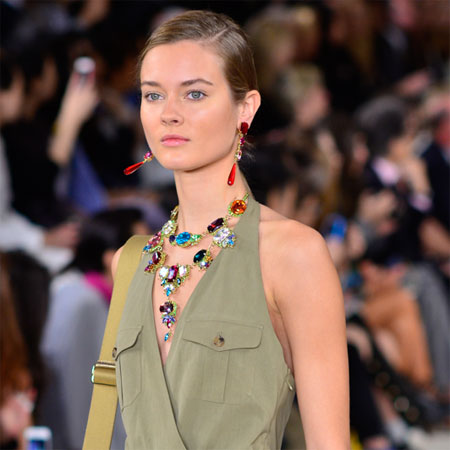 Monika “Jac” Jagaciak Jankic was born on 15 January 1994 in Poznan, Poland. She is the daughter of Jaroslaw Jagaciak and Marlena Jagaciak. Monika Jagaciak comes from an athletic family. Her father coaches athletes from Wielkopolska, whereas her sister Anna competes in long jump and triple jump.

Happy Birthday to my first partner in crime, my sister @aniajagaciak ♥? thank You for teaching me how to talk back and roll my eyes when the situation calls for it ???? Sto lat Jagienka ???????? #freethenipple

Jagaciak’s modeling career began in 2007 when her sister encouraged her to attend GAGA Models Agency at a shopping center in Poland. Then, IMG modeling agency signed her to work for them in July 2007.

Monika Jagaciak’s breakthrough came in modeling when she went on to land a Hermes campaign for the Fall/Winter 2007 season alongside Daria Werbowy. Monika Jagaciak hit six hundred applicants to be on the show.

@olivier_rousteing thank You for having me in your show yesterday ♥? @balmain #balmainarmy ????????

Following her first major success, Monika Jagaciak started traveling the globe for her career. In 2008, she appeared on the cover page of Elle Japan.

Apart from her modeling career, she is also a producer. She co-produced a short film named Letter to My Mother. The film released in January 2017. Besides that, Monika Jagaciak faced a controversy in 2008 when she was deemed unsuitable for Australian Fashion Week.

Hello Madrid. Hello @FilmFestInt !! So proud to represent the whole crew that worked so hard on Letter to my Mother ! #iffMadrid #ltmm pic.twitter.com/2Zs9cMXe1H

Jac Jagaciak is a happily married woman. She married to a prominent Serbian photographer and filmmaker, Branislav Jankic in 2017, where only close friends and relatives attended their wedding. The couple officially appeared first time together at Victoria’s Secret show and the promotion of the Letter To My Mother project.

Instagram: Monika and her Husband Branislav at their wedding;

Besides that, Monika Jagaciak prefers playing different kinds of sports and drawing. She usually uploads pictures on her social networking sites.

Monika Jagaciak advertised for brands like Dior eyewear, Dolce & Gabbana, Gap, Hector & Karger, Hermes, Hugo Boss, Issey Miyake Pleats Please, J Brand and much more. Moreover, she earns her income from endorsement deals. As of 2017, her net worth is estimated to be around $ 1 million.