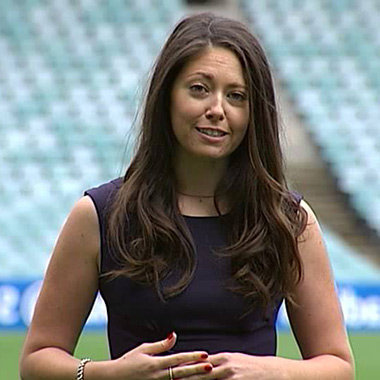 Morgan Kasmarik is a famous name who has gained name and fame as a sports presenter and reporter of Sky News Australia. Having a bold personality and magnificent presentation skills, she has been able to leave a strong impression on Sky News. She has been working for Sky News since 2014. She also has experience of working as an intern at the ABC in 2009, when she was studying at the University. After the completion of an internship, she was accepted in a role of the broadcaster to cover the sport for both radio and TV. Within a short period of time, she has been able to present her talent in Sky News.

While talking about her early life, Morgan Kasmarik has not talked about her childhood memories in media. So, there is no any information about where and how she spent her childhood days. She completed her college education from Bishop Druitt College where she studied from 1999 to 2004. After completing her college education, she decided to pursue a career in Journalism. She graduated from University of Canberra with Bachelor of Sports Media, Journalism in 2007.

Morgan Kasmarik began her career as a reporter/newsreader from Radio 2SM where she worked from December 2007 to September 2009. While working for radio 2SM, she got a job offer from ABC TV Woman Sports Broadcaster as an Intern in 2009, when she was selected among the pool of 100 applicants. She did an internship for one year and it was considered as one of the important periods of her career life. During her internship, she worked on various projects including Sideline commentator and co-host of Sydney’s premier rugby union competition the Shute Shield, an online reporter for the Vancouver Winter Olympic Games and reporter for tennis tournament the Hopman Cup. From 2010 to 2012 she worked as a freelance reporter in Fox Sports News where she contributed in presenting live bulletins and updates and reporting live from sporting events and training seasons.

In 2012, Morgan Kasmarik worked at Times Now as “Gold Rush”- Olympic Games Host for less than a year. During London Olympic, she hosted a show for Times Now in India where she interviewed guests from Indian Olympic and Sporting legend. From 2010 to 2014, she worked as a sports reporter at ABC where her role was to produce news for television, radio and online. She also contributed in reporting live from sporting events and training seasons and worked as a presenter of sports updates for ABC News 24. During her tenure in ABC, she served as London Para Olympic Games reporter.

Currently, Morgan Kasmarik is working as Sports Presenter and reporter for Sky News Australia since May 2014. She has been producing and presenting live half-hour sports updates and producing and presenting in-flight sports updates Qantas. Besides her profession, she prefers to spend time in the ocean, surfing, and swimming and has been working to improve her French language.