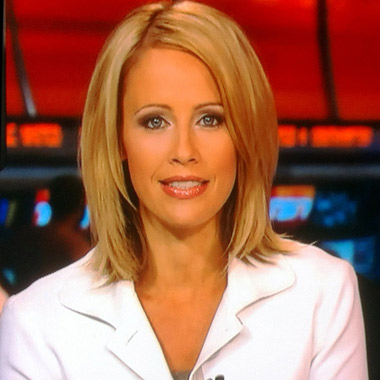 Natasha Staniszewski is a famous Canadian sports reporter born on May 24, 1979, in Edmonton, Alberta.  She is currently an anchor on TSN’s SPORTS CENTRE.

Natasha was raised in Edmonton and also completed her studies in Edmonton. She studied Business at the University of Alberta but decided to be a sports broadcaster. She, herself is a big fan of sports and athlete having good skills in volleyball and basketball.

Natasha took her broadcasting degree from Nait, Edmonton and started as a news reporter in CTV Yorkton in 2006. CTV moved her to Saskatoon to cover WHL and University athletics and as station’s anchor in 2007. She moved to CTV Edmonton in 2009.

Staniszewski covered Grey cup in 2010. Mark Mellierie, vice-president of TSN hired Natasha in place of Jennifer Hedger while she was on maternity leave. She hosts morning SportsCenter alongside Kate Beirness since 2013.

Natasha always wanted to become sports broadcaster but she hadn’t done anything fruitful to fulfill her dream until she was 26 and joined NAIT’s Radio and Television Program. After that, she hadn’t missed any opportunity to fulfill her dream. Her dream since childhood was fulfilled being associated with CTV. When she got a chance to cover Grey Cup in Edmonton she was super excited and believes Edmonton as the best place for broadcasting sports.

At TSN she covered Olympics, Women’s World Hockey Championship, Leafs games, Canadian Women’s hockey and Olympic Winter games in 2014.
Natasha is the inspiration for many new journalists because she is an example that anyone can fulfill their dream no matter the age or time. You just need to do what you have to do.

Natasha Staniszewski has listed in the top 60 sexiest female journalists in 2013 in the world and top 10 in Canada. She has a charming personality with a good height beautiful smile. Natasha has short blonde hair with a sexy attitude.

Her surname is hard to pronounce so once she thought of changing it to something easier to pronounce. She is a huge fan of the Edmonton Oilers. Natasha’s clothing stylish is Lee Kinoshita-Bevington, who also works for other anchors in TSN. Natasha feels totally comfortable working with him. Outside the network, she usually likes simple dresses and jeans.

Natasha admits that she gets to travel very much and sometimes even internationally while working with TSN. Natasha has a good salary and also getting a special budget for her wardrobe but she admits that she doesn’t like lots of shopping but she has to manage wardrobe for broadcasting sports news.

Natasha likes travelling, reading, and Sports. She likes ice-cream and guys hit her online. Natasha likes to converse with fans who love her. You can follow her on her Instagram, Twitter, and facebook to know her better. Pictures of Natasha Staniszewski are easily available on the internet and her videos on YouTube.