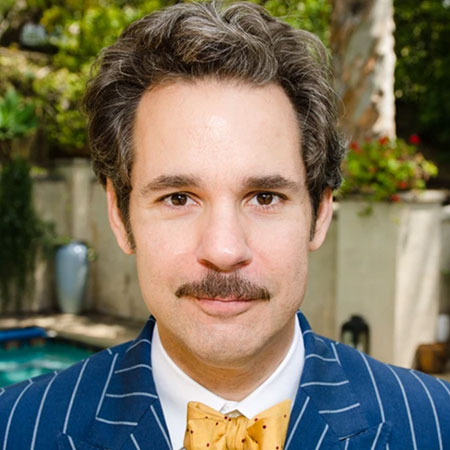 Paul F. Tompkins is a comedian, actor and writer who has made appearances on various television shows such as Best Week Ever and Mr. Show with Bob and David Real Time with Bill Maher.

Born on September 12, 1968, Tomkins has been active in the Hollywood as a Comedian, actor, screenwriter and television producer. He was born and raised in Mount Airy, Pennsylvania along with his two brother and three sisters. Tompkins has gained name and fame for his numerous appearances on various video series. He also made 100+ appearances on Comedy Bang! Bang! and has worked as the host of the Fusion Channel talk show No, You Shut Up!, online interview series Speakeasy with Paul F. Tompkins and The Pod F. Tomkast which was ranked 1 in “The 10 Best Comedy Podcasts of the Moment”, list published by Rolling Stone. Similarly he has also hosted shows such as The Dead Authors Podcast and the Earwolf podcast SPONTANEANATION with Paul F. Tompkins. In Netfix animated series BoJack Horseman, he contributed as voice actor for Mr. Peanutbutter. Similarly he has also been appearing as a main cast member of the Superego video series and has been a regular player on podcast Thrilling Adventure.

Tompkins made his debut performance from the show The Comedy Works when he was 17 years old. He appeared on the role of a sketch comedy duo (Rick Roman as his partner). He joined Temple University but having passion of acting, he could not continue his study and left the university. To pursue his career in acting he moved to Los Angeles, California in 1994. During his days in California, he met with various actors and worked with them in numerous series and stages. His friend actor and director Adam McKay introduced Tompkins to actor Jay Johnston. Tompkins had good relationship with Adam McKay, with whom he began to give stand-up in Philadelphia. After becoming friend with Jay Johnston, they together created a comedy show named “The Skates”. After seeing their performance in the show, Bob Odenkrik and David Cross appreciated them and helped to be hired for the show Mr. Show with Bob and David in 1996.Tompkins has been able to show his strong presence in Hollywood with his live comedic performance. He is known for his stand-up, sketch comedy and other various live performances. He mostly appeared on storytelling and observationalist style of comedy performances. In his performance he tries to include wide variety of topics such as a discussion about cake versus pie and a rant about peanut brittle and most his performances include story based on his own life experience. His dressing style has always been point of attraction during his stage performance and his looks has been described as “dapper”. Currently he is in L.A. and active in various stage shows.

From 1995 to 1998, he wrote for Mr. Show with Bob and David and he was nominated for Emmy awards along with other writers of the show. Though he has written for various shows, in an interview he stated that he prefers to perform in front of camera than writing. He has also given his voice for various animated T.V. series such as Dr. Katz and King of the Hill.

Tompkins has been married to his wife Janie Haddad since 2010 and the couple seems happy with their relationship. Tompkins is active in all social networking sites. His twitter was listed in “The 75 Best Twitter Accounts of 2014” list where his account was placed in rank 70. Tompkins has estimated net worth of $2million. He stands tall with height of 5’9’’.