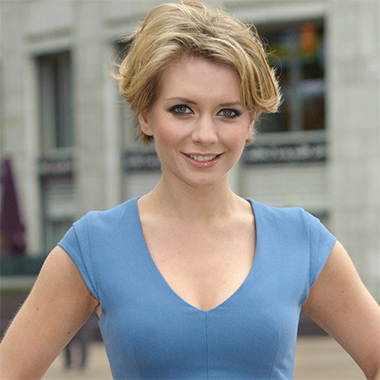 Rachel RileyRachel Riley is an English television presenter, mainly known for co-presenting the Channel 4’s hit show ‘Countdown’ and Channel 5’s popular program ‘The Gadget Show’. Riley once participated in ‘Strictly Come Dancing’  and was the fifth contestant to be eliminated on 3 November  2013.

She was born as Rachel Annabelle Riley on 11 January 1986, in Rochford, Essex, England, UK, to Christopher (father) and Celia (mother). Her father is an accountant while her mother is a housewife. She has a younger brother named Alex. Riley described as a non-religious Jew.

Rachel Riley was raised in the Thorpe Bay area of Southend-On-Sea, where she attended an independent Thorpe Hall School. She then attended a grammar school at Southend High School for Girls and graduated with a four As at A-Level. Riley went on to study mathematics at Oriel College, Oxford and gained an upper second-class honors degree.

Rachel Riley started her television career with Channel 4,where she filled-in the place of Carol Vorderman and presented a game show ‘Countdown’ without prior experience in presenting skills. Before joining Channel 4 in January 2009, she worked as an intern in The City Bank of London for Deutsche Bank as a student. She had also briefly worked for a price comparison start-up company after her graduation. She there did the letters and numbers selection and mathematics solutions. So far, she has co-presented over 1000 episodes of Countdown.

According to her, she joined the show after her mother encouraged her to apply and  was interested in the numbers part of the game but she did not have the ambition to be a television presenter. From 12 January 2009, she presented Countdown alongside Jeff Stelling. She said that it was difficult for her to step into Vorderman’s shoes in an interview in August 2009. She also said that she was criticized by certain Countdown viewers for some of the wrong math’s puzzles. Since January 2012, Riley co-presented the show with Nick Hewer p.  She previously had problems in getting on.

Rachel Riley became a regular presenter on the Channel 5’s program ‘The Gadget Show’ from June 2013 alongside Jason Bradbury. On 25 April 2014, it was reported that she was leaving The Gadget Show after appearing in 9 episodes. In 2016, Riley was seen presenting ITV’s ‘It’s Not Rocket Science’ alongside Romesh Ranganathan and Ben Miller, who both have a background in math and science.
In August 2016, Rachel Riley was hired by Sky Sports to present ‘Friday Night Football’ with fellow ‘Countdown’ co-presenter Jeff Stelling. She was also assigned to co-present ‘Fantasy Football Club alongside Paul Merson and Maxx Rushden.

Rachel Riley married her college boyfriend Jamie Gilbert , whom she first met at Oxford University while they were a student. But after staying together for years, Riley and Gilbert ended their relation in the fall of  2009. Jamie again proposed to her on Riley’s 25th birthday on 11 January 2011, and got back together and engaged. The couple ties a knot on 11 August 2012, however, after being together for about 16 months, they announced they announced their separation in 2013.

Rachel Riley, who is a keen supporter of Manchester United like her father announced that she was in a relationship with her dance partner Pasha Kovalev in September 2015. In response to speculation that she ‘ran off’ with her dance partner, Riley has said that her marriage was breaking down before Strictly and that the relationship with Kovalev didn’t start during the show, only emerging once their professional relationship ended, by which time she felt the marriage was over.

Riley, who is a self-described non-religious jew and atheist was once a victim of threatening abuse from a stalker. She revealed this fact in May 2014. Her net worth is estimated to be $5 million dollars as of 2016.