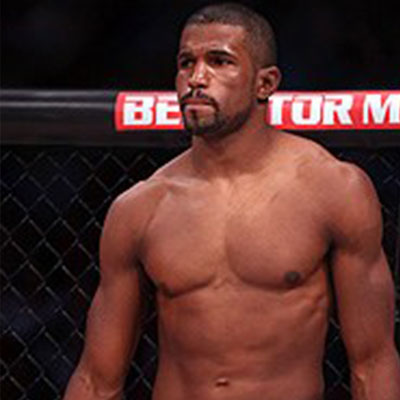 Carvalho was fined $5,000 USD for his unsportsmanlike conduct in his fight with Melvin Manhoef by the Association of Boxing Commissions. He is known for his aggressive behavior in the ring.

Rafael was born in Rio de Janerio, Brazil on 27th July 1986. Information about Rafael’s parents is not disclosed yet but as per Brazilian custom, we know that his mother is a Carvalho and his father’s name is de Souza. He grew up in Chapeu Mangueira favela in Rio de Janeiro.

Rafael says that his source of inspiration is his elder brother, Marcelo Penca. Carvalho took up learning martial arts since he was seven years old. His brother used to run a social project for poor kids. Rafael had the choice between jiu-jitsu and muay thai, which were the only option available in the project, Rafael took up muay thai.

Rafael, for his initial debut in mixed martial arts, was faced Julio Cesar Araujo Fernandes at Samurai FC6 but he ended up losing the match. Determined after his defeat in his initial match, Rafael hen maintained a fiery streak of 9 unbeaten matches. He won the title of Smash Fight middleweight championship.

Looking at his unbeaten streak, he was signed by the Bellator middleweight. Rafael made his first appearance for the Bellator facing against Brain Rogers. He won the match and successively also won against Joe Schilling on 10th April 2015.

The title of Bellator Middleweight Championship was open to taking. Rafael faced the legend of Middleweight, Brandon Halsey and won the fight making Carvalho the first ever to defeat Halsey.

For the title defense, on 20th May 2016, Rafael was matched with Melvin Manhoef. Carvalho did win the match but the strategy and the measures he took to win was remarked as controversial. A rematch was scheduled which Rafael won.

Likewise, Rafael Carvalho won rest of his two title defense and his last match as per his contract is scheduled for 25th May 2018 at Bellator 200 in London.

Rafael returned to the martial arts world in 2005 after he joined the army. He states that he enjoined the initial phase of the army but found it to be belligerent and resigned after 10 months of mandatory time frame.

After getting back from the army, he worked as a waiter and then just to stay in shape he took up martial arts again and did few armature games. He has no known girlfriend or wife and is probably single.

The streaking Brazilian MMA fighter has a salary of $14,000 USD per fight. He is the current Bellator Middleweight champion so the title must be a sound source of income. Furthermore, he is sponsored by various brands and must receive a generous amount of money from the sponsors as well.

Allocating information from several sources as of 2018 it is found out that Rafael current estimated net worth is around a million dollar.