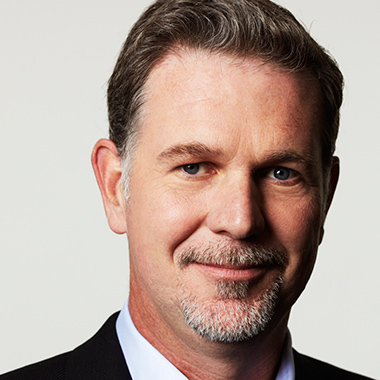 How many of you think that development of the Netflix is the best thing that has ever invented or created? Do you know who the man behind it is? Well, the behind Netflix is Reed Hastings and yes Reed Hastings bio is equally interesting as Netflix. Reed who serves as the CEO of Netflix is also the board member of the famous social networking site Facebook along with several other non-profit organization.

He started his first job by selling vacuum cleaner door to door and developed the true strategy of marketing and later in his life, he went for Peace Corps when he learned that in life we have to take several risks being aware of the upcoming consequences. Returning from the Peace Corps he later graduated in Master Degree in Computer Science from the Stanford University.

Hastings first job in the computer field was Adaptive Technology which he left on purpose in the year 1991 and began to operate his own company named Pure Software. The company was a big hit and started to increase in rapid order but due to Reed lack of management power, the job became quite challenging. He even requests the director to replace him from the board they solely decline the offer and as a result, Reed gives the total credit to them as it taught him to be one of the best businessmen. The company, later, was merged with Atria Software where Hastings was assigned the position of Chief Technical Officer however due to overheating bureaucracy he left the company and co-founded Netflix with Marc Randolph in the year 1998.

Though he started the company but he was in very much doubt whether the company will run smoothly or not. Reed implement several strategies and marketing policies to gain customers and hardworking employees and finally his strategy did work. Since he is a believer he didn’t lose hope to make this company bigger and better. In the year 2007, Hastings introduce the system of streaming movies and TV shows to computer and mobiles. And in the year 2012, he made significant decisions which led to utmost customer dissatisfaction and cancellation of orders which force him to resign from the company. Since he was the co-founder of the company he refuses to back off from the company and solved the problems which were never seen before in his 12 years life at Netflix.

“There is a revolution happening, and within two years I think that Wi-Fi and Netflix will be built into all the televisions.”

Hastings is also the board of directors of Microsoft and Facebook along with other different organizations. Reed is also active education philanthropist and has donated more than millions of dollars to Beacon Education Network for creating schools and betterment of the students. Similarly, he is also involved in Political Network of Businessmen and Executive in Technology Networks. Coming to his personal life, various information has been kept private but we do know that he is currently residing in San Francisco Bay along with his wife and two children.