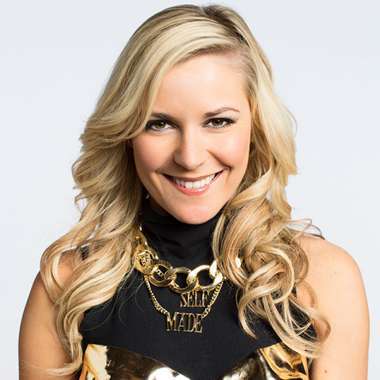 Sports broadcaster and actress are considered as the hot and glamorous profession. Very few people have achieved success in both industries. Among them, Renee Paquette is such a name who has gained name and fame as a sports broadcaster and actress and at the same time she has also made her identity as WWE Wrestler. Born on September 19, 1985, this hot diva currently associates with WWE as on-air personality under the ring name Renee Young.

Renee Paquette, who currently performs interviewing and commentating duties on WWE belongs to Canadian Nationality. Born in Toronto, Ontario, she started her modeling career from her childhood days. After completing her high school education in one of the well-known schools of her hometown she applied to various colleges and started her training in improvisational comedy. She moved to Los Angeles to get her dream of becoming a comedic actress when she was 19 years old. After spending some time in Los Angeles she moved back to Toronto and started to appear in an audition for films, music videos, television series, and commercials.

While talking about the professional career, Renee Young started to work for The Score Television Network in 2009 and appeared on program Right After Wrestling. Later on, she worked with Arda Ocal and Jimmy Kordeas, who is the former WWE referee. In 2012, she signed a contract with WWE, the American Professional wrestling promotion in 2012 and started to appear on the ring under name Renee Young. She made her on-screen debut SmackDown on 29 March 2013 when she interviewed Big Show, Sheamus , and other WWE celebrities. Previously, Young served WWE actively since 2013 interviewing various celebrities alongside Scott Stanford. She started to work as a backstage interviewer on NXT from January 23.

Renee Young also has experience of working with other medias such as Bite Tv, Toro Magazine and on various commercials. She was the recipient of Slammy Award for Favorite Web Show of the year in 2013. Her television works include The Smart Woman Survival Guide (as Cute Intern), Gotta Grudge (as herself), Total Divas, WWE Countdown, WWE Quick Hits, WWE Tough Enough and Unfiltered with Renee Young.

Moving to her personal life, Renee Young might have been in relationships with different men, which have not been disclosed yet, before she confirmed her relationship with wrestler Jonathan Good who is known as Dean Ambrose in the ring. Being a wrestling fan she has the privilege of being with various WWE superstars such as Stone Cold, Triple H, Trish status as a kid at the backstage. Her father was concert promoter and she used to go with various events with her father where she met many WWE superstars and got a chance to be close with them. Coming to this far she might have made good money out of her professional career, but there is no any source to reveal the exact figure of her earning. She is blessed with beauty with brain and has a height of 5’5’’. She is active on all social networking sites where she frequently interacts with her fans.