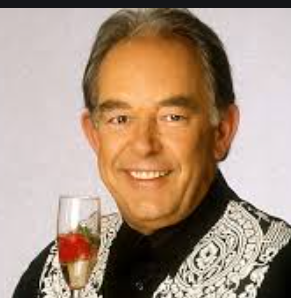 A British television show host, Robin Leach is known for his appearance in Lifestyles of The Rich and Famous. Beginning his career as a school, magazine editor he has crawled his way up to the top level reporter and well-established television personality.

Leach is having an affair with actress and former American fashion model, Joan Severance. The duo is seen hanging out together time and often.

During his school time, he got a chance to edit a school magazine, The Gayton Times. Soon after when he was at an early age of 15 he was appointed as the post of general news reporter for the Harrow Observer.

Leach began his career from an early age of 14 serving as an editor of school magazine The Gayton Times. He then worked as the general news reporter for the Harrow Observer at the age of 15 followed by monthly glossy town magazine when he was 17.

When he was 18 he became Britain’s youngest Page One reporter at Daily Mail. He shot the fame in 1984 after hosting the popular show Lifestyles of the Rich and Famous. He further went to America to expand his skills and started writing for the publications like New York Daily News, Peoples, and Ladies Home Journal.

[ CAPTION: Lifestyles of the Rich and Famous ][ SOURCE: YouTube ]

Leach made his screen debut with AM Los Angeles on KABC-TV. He reported on the shows like People Tonight, Entertainment Tonight, Good Morning Australia and Food Network. He made his guest appearance in World Wrestling Federation’s Wrestle Mania IV reading the rules for the championship tournament. Moreover, he hosted an expose documentary Madonna Xposed on Fox Network.

Likewise, Robin Leach hosted Lifestyles spinoff Fame, Fortune, and Romance alongside Matt Lauer. In 2007 he became the host of VH1’s The Surreal Life: Fame Games. In 2006 he appeared in the documentary film Maxed Out.

Robin Leach was once a married man. He married to the anonymous girl whose information is yet to be disclosed while later divorced her. He is a father of three children.

As of now, he is in a romantic relationship with Joan Severance. Since their encounter in 2002, the duo has been inseparable sharing undeniably strong bond between them. Even after being together for over 16 years the couple hasn’t tied the knot yet. It might take a while for them to come to that stage.

Leach was once caught up in the rumor of being gay. The allegations never ended due to the lack of comments on the regarding the topic. The question about his sexual orientation is still left hanging in the air.

In 2017, Robin had a transient ischemic attack aka mini-stroke during his vacation in Cabo San Lucas.

Leach is one of the highest paid reporters in the entertainment industry. He worked for several tv stations where he hosted several hits shows through he receives a huge sum of money as salary.

Allocating information from several sources as of 2018 it is found out that Robin Leach current estimated net worth is around $15 million with a massive amount of salary. As a celebrity in Lifestyles of the Rich and Famous, he lived a lavish life filled with elegant parties in the circle of rich people. He has well maintained his lifestyle and appears quite classy and trendy.