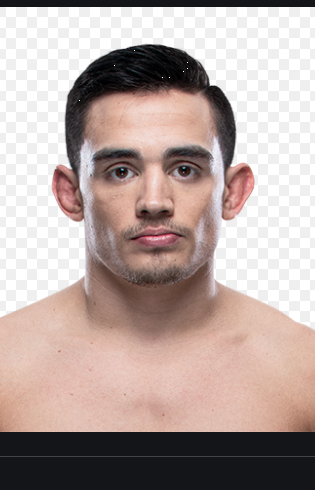 Well, Mr. Benoit is already a married man to his long-term girlfriend turned wife and is blessed with an adorable baby girl.

Ryan Michale Benoit akes Ryan Benoit was born to American parents on 25th August 1989. He spent most of his childhood in the city of San Diego, California.

Standing 5 feet 5 inch tall, Ryan Benoit is a fitness freak and has maintained his weight of 129 Ibs. His star sign is Virgo. He holds the citizenship of the United States and practices Christianity.

He attended McKinney North High School where he is a three-time All-State Wrestler. Showing much more interest in the related field, Benoit left the college to pursue his further training at Saekson Janjira Muay Thai Gym, Plano.

As a professional, Ryan Benoit made his debut match from MMA in the year 2009. Before this, he went for training nearly for two years in 2007. There he fought and hold the record of 7-2 and secured his future in the Ultimate Fighting Championship (UFC).

Looking at his small handsome face, he has got a nickname called ‘Baby Face’ in the ring. He looks like a baby in comparison to other jack guys but his opponent always must remember that he is a small package with a bigger blast: as he has significant remark with 7 won and 2 loss out of 9 games before he entered in the UFC game.

On 30th November 2013, he made a promotional debut at The Ultimate Fighter 18 Finale against Josh Sampo. He gave his best but lost the match with the submission rear naked choke in the second round. Despite the loss, he successfully received a Fight of the Night bonus award for his great bravery.

YouTube: Ryan in one of the match MMA highlight;

Till date in the UFC championship, Benoit faced the opponents like Sergio Pettis, Ben Nguyen, Fredy Serrano, Brandon Moreno and Askhan Mokhtarian out of which he won 3 of the match and lost 3 of them.

Further, Ryan Benoit signed a new four-fight contract with UFC which was announced on 5th January this year. Currently, he ranks 20th position among the best MMA flyweight fighters.

This 28-years-old handsome guy, Ryan Benoit is married to his beloved girlfriend, Marilyn Gomez. She is a former mixed martial artist and belongs to the same profession family background.

The beautiful duo met for the first time while both of them were practicing Muay Thai boxing and began dating each other. After dating several years, they tied a knot on 5th February 2013.

It’s already more than five years in a marital relationship, still, the husband-wife has a strong bonding with each other. Together, they share a beautiful daughter, Rylyn who complete their small and happy family. He often shares his daughter photos having a romantic moment on his official Instagram account.

This UFC star, Ryan Benoit has earned a huge name and fame through his profession. As of 2018, he has a career disclosed earning of about $218,300 which includes Fight bonus, prize money, and endorsement.

Though his salary per fight is yet not published but looking at his luxurious lifestyle, we can definitely say that he enjoys his net worth in six figures. Currently, he lives with his family in the city of San Diego, his hometown. He owns a dog in his house.

Being passionate about the tattoo, he also has got few of them on his body parts. Not only this, he even takes his family to the vacation during leisure time.