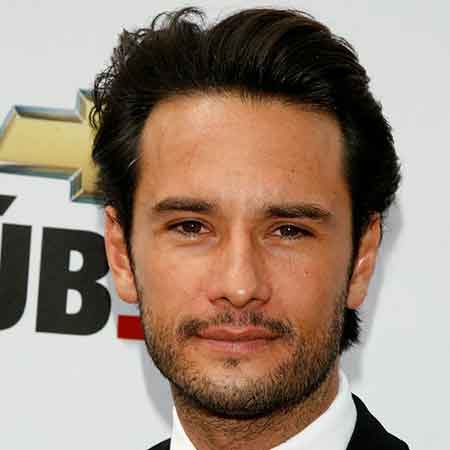 Rodrigo Santoro is a Brazilian actor better known for his roles in several popular movies including 300, Xerxes, Love Actually etc. Santoro is dating his girlfriend Mel Fronckowiak and has a daughter named Nina Santoro from their relationship.

He currently appears on the series Westworld along with Zahn McClaren, Sidse Babett Knudsen, and others.

Rodrigo Santoro was born on 22nd August 1975, in Petrópolis, Rio de Janeiro, Brazil. He belongs to a Brazilian nationality. His father Francesco Santoro is an Italian engineer and mother Maria José Junqueira dos Reis a Brazilian artist of Portuguese descent.

Santoro grew up along with his brother Flávia Junqueira dos Reis Santoro. He graduated from the Pontifical Catholic University of Rio de Janeiro.

Rodrigo Santoro made his acting debut in 1993 through the television series Olho no Olho and played the role of Pedro until 1994. Since 2016, Santoro plays the role of Hector Escaton in the series Westworld.

Likewise, he made his movie debut through Depois do Escuro in 1996. In 2018, Santoro starred in the movie Un Traductor as Malin. Furthermore, he will be appearing in the movie Turma da Mônica – Laçosː O Filme in 2019.

Is Rodrigo Santoro Married or Dating Someone?

Rodrigo Santoro is not married yet however, he is currently dating his long-term girlfriend Mel Fronckowiak. The duo began dating in 2012 and are still together. They are already engaged and further has a daughter Nina Santoro born on June 7, 2017.

But yet, they haven’t shared any pictures of their daughter. As they are already engaged, they haven’t mentioned any plans of getting married. Santoro and Mel have maintained a good relationship and often shares pictures on Instagram.

Santoro and his girlfriend Mel may have plans of getting married and living happily as a husband and wife with their children.

Besides this, Santoro previously dated several other celebrities including, Ellen Jabour, Fernanda Lima, Luana Piovani and Cássia Linhares. Moreover, he was further rumored to be in a relationship with Jennifer Lopez, Natalie Portman, and Gisele Bündchen.

As of 2018, Santoro has an estimated net worth of $10 million. The multiple awards winning actor Rodrigo Santoro earns a decent amount of money from his acting career.

Santro is living a lavish and standard life with his wife and daughter. Analyzing his hard work and dedication, Santoro’s net worth is sure to be increased in upcoming days.