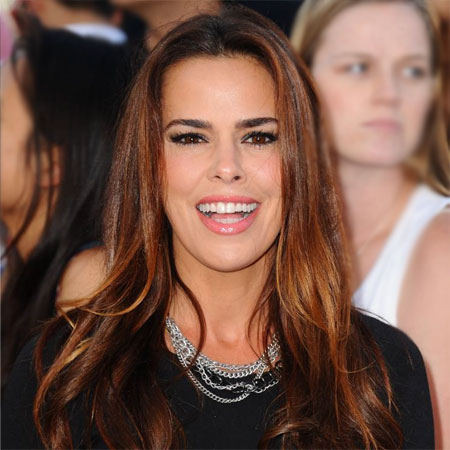 Rosa Blasi is an American actress, best known for her role as Luisa Delgado in a medical drama series Strong Medicine (2000–2006). These days, Blasi appears on the  Nickelodeon series The Thundermans since 2013. Blasi also starred in movies like Memories of Murder, Lesser Of Three Evils etc.

Blasi is currently living with her husband, Todd William Harris and is blessed with two children. Furthermore, previously she was married to Jim Finn.

Rosa Blasi was born on 19th December 1972, Chicago, Illinois, United States. She is the daughter of Rocco Blasi and Joyce Blasi. Her parents are of Italian, Irish, and Hispanic origin. Blasi grew up along with her two sisters; Marina and Tasha and two brothers; Michael and Rockey.

During her childhood, Blasi performed in the theaters for Piven Performance Company and The Second City. Furthermore, she also starred in many musicals along with Kenny Rogers.

Well, she got widely recognized after starring in the Lifetime drama series Strong Medicine from 2000 to 2006. However, Blasi made her first movie appearance in the movie Noriega: God’s Favorite as Vicky Amador in 2000.

Moreover, Blasi also reprised her roles in the famous television series like Make It or Break It, General Hospital etc. Likewise, Blasi also worked at the Apollo Theater during The Vagina Monologues. Furthermore, she has also appeared in the recurring performer at the “What a Pair” benefit concert for breast cancer research.

Does @kellymonaco1 know what an amazing actress she is? She blew me away this week. #GH pic.twitter.com/pHs8yijdNA

Blasi was also a repeated guest on talk shows like Politically Incorrect with Bill Maher and The Late Late Show with Craig Kilborn. Besides her acting career, Blasi has also written several articles for the Huffington Post.

Recently in 2017, Blasi starred in the television series Battle of the Network Stars.

Furthermore, these days, she appears on the television series The Thundermans as Barb Thunderman/Electress since 2013.

44 years old Rosa Blasi is married twice and divorced once. Previously she was married to Jim Finn on 14th February 2004. Jim is a former New York Giants fullback. The former couple welcomed their daughter Kaia Finn on 20th September 2006.

But this couple failed to continue their relationship and divorced in 2008. Currently, Blasi is living with her husband Todd William Harris who is a mortgage broker.

For the first time, they met each other at Match.com and started dating. However, after 16 months of dating, they tied the knot on 3rd May 2014. Blasi also has a stepdaughter Ryan from the previous wife of Todd.

Allocating information from several sources as of 2018, it is found out that her current net worth is estimated to be $1.5 million which is totally worth. Her main source of income is acting. Till the date, Rosa Blasi has starred in several movies as well as in television series which is helping her to make such a huge net worth.

Well, observing her personality it is sure that, Blasi enjoys a lavish life. Blasi is giving her continuity in her career. So, it is sure that her net worth will be increased in upcoming days.