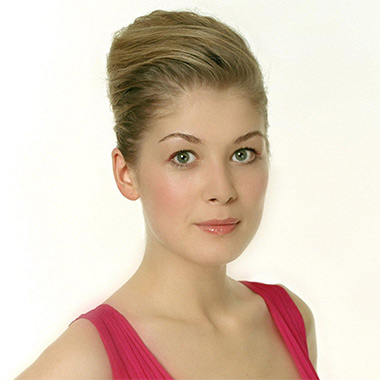 Rosamund Pike, a well- known English actress, was born in Hammersmith, London to Caroline and Julian Pike who were both opera singers. She travelled across Europe at the age of seven followed by her parent’s performances. Her father currently works as a head of Operatic Studies and professor of music. Rosamund won a scholarship to Badminton School in Bristol as Juliet at National Youth Theatre. After that, she attended Wadham College, Oxford to study English Literature. In 2001, Rosamund also gained an Upper Second class degree.

Rosamund started her acting career by appearing in several shows like Wives and Daughters, A Rather English Marriage, Love in a Cold Climate while she was studying at university. After graduation, she worked at Waterstone’s bookshop as she lacked acting opportunities. Later, Rosamund got a role in Die Another Day as a Bond girl and MI6 agent and then was also seen in the show Bond Girls Are Forever. Along with Johnny Deep, she played in – The Libertine as Elizabeth Malet for which she won Best Supporting Actress award. She played in The Promise Land as Rose, in the computer series Doom as a scientist Samantha Grimm. In 2005, she played in Pride & Prejudice as Jane and in Fugitive Pieces which the adaption of Anne Michael’s novel. Her works include the movies Fracture, Madame De Sade, and Dagenham.

Rosamund played as a psychologist and English’s love interest in Johnny English Reborn in 2011 which did a business of $160 million and became box office success. In 2012, she played in the film Wrath of the Titans as Queen Andromeda replacing Alexa Davalos which was also a great success. After that, Rosamund appeared in a thriller  Jack Reacher alongside Tom Cruise as Helen Rodin. She got a lot of positive response after her work in the movie Gone Girl.

Rosamund was previously engaged to Joe Wright, a film director, for about a year after 2007. Later, they got separated in 2008 and then started dating Robie Uniacke. Robie is an ex-drug addict and an English business and Rosamund has two children with him, both of them sons, Solo and Atom.

Rosamund Pike: Achievements and Net Worth