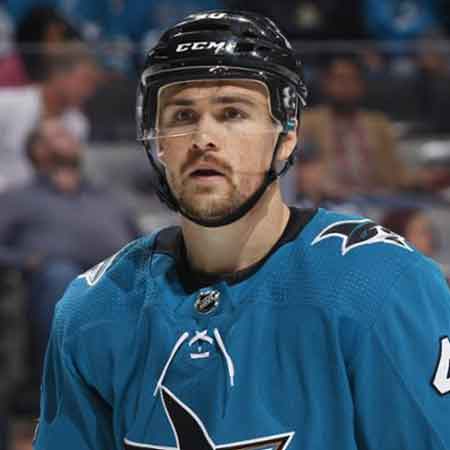 An American professional ice hockey player, Ryan Carpenter currently plays for the Vegas Golden Knights of the National Hockey League (NHL). Carpenter signed for San Jose Sharks in 2014 and made his NHL debut on December 11, 2015.

Ryan Carpenter was born on 18th January 1991, in Oviedo, Florida, United States. He belongs to an American nationality and holds white ethnicity. Carpenter grew up along with his siblings Kelsey Dessingue (Carpenter), Chris Carpenter and Nancy Carpenter.

Carpenter attended the Timber Creek High School and began his junior career with the Sioux City Musketeers in the USHL and played two seasons. He completed his graduation from the Bowling Green State University.

During his career at University, Ryan Carpenter won the BGSU Rookie of the Year. He was one of the four Falcons to play 44 games during the rookie year. After completing his rookie year, Carpenter signed with the San Jose Sharks on March 26, 2014. He played 2014-2015 season for Worcester Sharks and scored 12 goals, 22 assists with 34 points.

Carpenter played 2015-2016 season for San Jose Barracuda. And on December 11, 2015, San Jose Sharks called Carpenter back and he made his NHL debut on the same day against Minnesota Wild. He even won a Yanick Dupre Memorial Award for community service.

One of the prominent ice hockey players, Ryan Carpenter has a successful career as well as personal life. Well, Carpenter is married to wife Alexis (Kain) Carpenter. The couple shared their vows back on June 21, 2015. They have welcomed their son on June 10, 2017, but they haven’t mentioned his name.

The couple enjoying their married life and yet they haven’t faced any rumors of divorce and other extramarital affairs. Besides this, Carpenter hasn’t dated any girls in past.

Ryan Carpenter has maintained a standard lifestyle. Carpenter began his career as an ice hockey player since his school days. He has earned an astonishing amount of money from his playing career.

On June 17, 2017, Carpenter signed two-year extension contract with San Jose Sharks for $1.3 million and his current salary is $650,000. As of now, Carpenter has an estimated net worth of around $3 million.