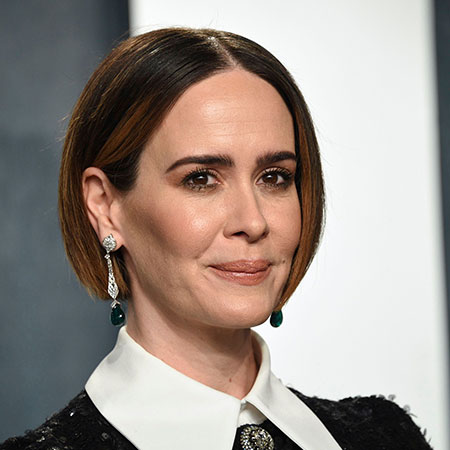 Hollywood has always places for those dedicated and hardworking person who take acting as their passion. Sarah Catharine Paulson, often known as Sarah Paulson, represents herself as a film, stage and television actress. Starting her career from the stage, she appeared in America Gothic and Jack & Jill. She also acted in numerous comedy films such as Down With Love and What Women Want. She appeared in a dramatic role in Path to War and The Notorious Bettie Page. With her impressive acting, she has been successful in impressing producers and directors in Hollywood.

Going back to her early days, Sarah Paulson was born on December 17, 1974, as a daughter to Catharine Gordon and Douglas Lyle Paulson II. She was born in Tampa, Florida and lived there until the age of five. Her parents divorced when she was 5 and then she spent some time in Maine. Later on, she moved to New York with her mother. In New York, she lived in various places such as Queens and Gramercy Park and at the end, she settled in Park Slope, Brooklyn. She used to spend her summer in her father’s place. Highly qualified Paulson attended Manhattan’s High School of Performing Arts late she joined the American Academy of Dramatic to flourish herself in art.

“The thing I worry about myself is I spend a lot of time alone, and another person comes around and you are like, ‘What are you doing here? Get out here.”

Sarah Paulson began to work as an actress after completing her high school. She made her appearance in the Horton Foote play and the Signature Theater. She also played a role in a Hallmark movie ‘Friends’ at Last in 1995. She went to North Carolina where she started to act on short-lived cult television series American Gothic. Paulson got a role on HBO series Deadwood and on critically acclaimed FX series Nip/Tuck. She also appeared on various TV series in supporting roles. In 2008, she appeared on Cupid, a remake of 1998 series. Similarly, in 2011, she appeared in 3 episodes of the American Horror Story, the FX anthology, where she played the role of Billie Dean Howard. In American Horror Story: Asylum, Paulson returned to a character of a writer, Lana Winters, who is committed to an asylum for being gay. Paulson has also had a successful vacation in the theater. In 2005, she played the role of Laura Wingfield in The Glass Menagerie, a revival of Tennessee William’s play. In 2014, Ryan Murphy announced that Paulson will cast his upcoming series American Crime Story, true anthology series, in a portrayal of Marcia Clark.

Moving to her personal life, Sarah Paulson had been dating actress Cherry Jones before they broke up in 2007. In an interview, she stated that she only had dated men before being in a relationship with Jones. But she is suspected to be Lesbian as in 2015 she was reported to be dating with actress Holland Taylor. Till date Paulson has a net worth of $4million. Blessed with beauty and brain, Paulson has a height of 5’6’’. She is active in all social networking sites.